How mobile-optimized nonprofits lead their donors on a journey

For many people, mobile has become the default channel for accessing the internet, reading emails, watching videos and using social media. As of early 2018, 77% of the American population owns a smartphone.

Mobility has blazed a path across nearly all sectors. It has forever changed the way people consume media, shop for goods, bank, communicate and much, much more.

But nonprofits haven’t adapted to the mobile revolution as quickly as the rest of the world.

END_OF_DOCUMENT_TOKEN_TO_BE_REPLACED

Expand Your Nonprofit’s Universe with the 2018 Digital Outlook Report 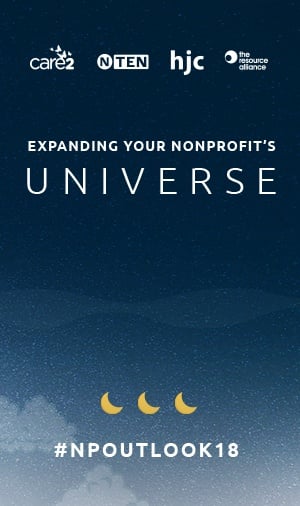 We are thrilled to announce that Care2, hjc, NTEN, and Resource Alliance have just released the 2018 Digital Outlook Report.

END_OF_DOCUMENT_TOKEN_TO_BE_REPLACED

The trend with #GivingTuesday continues as we see increasing numbers in donations every year. According to data from Blackbaud, there was a 20% increase in online donations this year as compared to 2016 and a whopping increase of 317% since the movement’s inception in 2012. Blackbaud alone processed $47.7 million in donations to more than 6,700 organizations. The amount of people that donated also grew, climbing 31% from 2015. interestingly when we reached out to some crowdfunding platforms in the nonprofit sector they did not want to disclose their numbers comparing 2015 and 2016 so it's unclear if this trend was seen across the entire sector.

END_OF_DOCUMENT_TOKEN_TO_BE_REPLACED

6 Fundraising Trends About Millennials You Need To Know Millennials often think of themselves as the socially conscious generation. As your organization continues to look for funding opportunities, consider millennials as a viable target market, since they are your future donor base.

Achieve, in partnership with the Case Foundation, released valuable insight into how millennials interact with the causes that matter to them. The report comes from five years of responses by more than 75,000 millennials and provides six main insights into the millennial generation’s relationship with charitable giving.

END_OF_DOCUMENT_TOKEN_TO_BE_REPLACED Online donations in December increased from 17.8% in 2014 to 19.8% in 2015, according to Blackbaud. The trend is clear: People tend to donate to organizations more around the holidays than any other time of the year. This is why year-end fundraising is so important to livelihood of nonprofits.

END_OF_DOCUMENT_TOKEN_TO_BE_REPLACED

Good news for nonprofits. Apple just announced that Apple Pay will now allow nonprofits to use the service for donations. Apple used to ban iOS apps from using Apple Pay to collect funds, meaning that charities needed to use third-party apps or outside services to process donations. Now, nonprofits can incorporate a donate button that processes transactions directly.

However this launch raises many questions: What kind of an impact will this have on nonprofits? How could your organization benefit from using Apple Pay? What are the downsides of using Apple Pay? How do you know if it’s right for your nonprofit?

We did some research over at Rad Campaign and have some great information for you as you continue with year-end fundraising.

An Apple Pay “Donate” button would mean that iOS users can use Touch ID on mobile and click “Donate” on the web. Users can confirm their donation with any of their iOS devices such as their phones, tablets or Apple Watches.

END_OF_DOCUMENT_TOKEN_TO_BE_REPLACED There are a lot of strategies that go into a well-developed and successful email marketing program. Some "experts" say that the most important element is that the subject line needs to be provocative. Some say the most the important strategy is to decide who the sender of the email will be and that’s what your donors will respond to. So what's the most important strategy to increase email conversion rates? Let’s dig in and look at the data...