After studying over 50 international nonprofit organization's email lists and response rates, the 2009 eCampaigning Review Study revealed that 60% of nonprofits present a compelling argument for supporters to take action, yet close to 70% of the organizations did not send a follow up email within one month. 37% of nonprofits did not even bother to send a thank you email. This surprised members of the nonprofit community because both thanking supporters and updating them after taking an action online is part of Online Advocacy 101. Both email strategies should be a part of any online communications cycle. 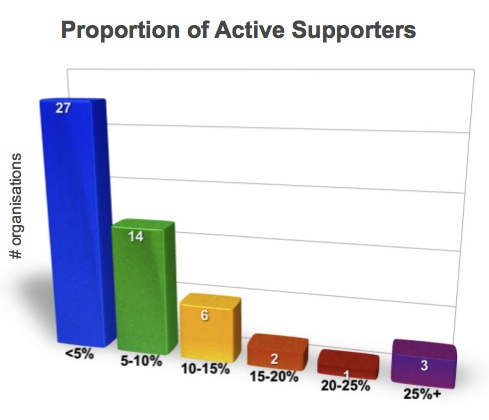 The study conducted by Advocacy Online, Duane Raymond of Fairsay and consultant Jess Day also noted that 50% of organizations' online lists had 40% or more inactive supporters. Only 9% had a strategy for reactivating dormant supporters. Yikes. What can we glean from this study? Nonprofits need to:

1. Segment their lists more and write separate emails that resonate with different levels and types of supporters.
In July, Frogloop posted an article on Five Symptoms that May Indicate that your Nonprofit Is Suffering from List Decay and suggested nonprofit’s consider asking themselves the following: How can members help the nonprofit and advance the mission besides signing petitions or donating money? Are their offline events they can sign up to attend? Can they volunteer? Write a letter to the editor?

2. Survey their list at least once a year and ask supporters what issues do they think the organization should take on?
The key is to make online members feel like their opinions count and that your organization cares. Also ask members what motivates them to take action and donate money.

3. Determine if these inactive members are bad email addresses.
Remove them from your list. Only 33% of organizations surveyed cleaned up their lists.

4. After a few attempts of trying to re-engage inactive supporters, consider removing them from your nonprofits list.
I know that this can be controversial for organizations that pride themselves on list size, but there is no reason to keep people on your list who aren’t at the very least opening up your email communications.

Other noteworthy stats from the 2009 eCampaigning Review Study are:

Nonprofits are making progress with their online communications, but need to adapt some very basic best practices to move their members up the ladder of activism.

Highlights from the 2009 eNonprofit Benchmarks Study

Are Email and Fundraising Response Rates in a State of Decline?

The 2013 eNonprofit Benchmarks Study with 2012 stats was just released and it's packed with all sorts of juicy email, advocacy, ...
Start Reading