First there were rumblings that direct mail was dying. Then TechCrunch said Web2.0 was dying. Yea right! What medium is the next victim? Email, according to a recent article by the Wall Street Journal (WSJ). Email is not king anymore because Web 2.0 platforms like Twitter and Facebook are the new king in town, said the WSJ. Could email really be fading away? Let’s take a look at the facts.

Social network demographics can be skewed. What percentage are really “active users” and communicate via social networks daily? 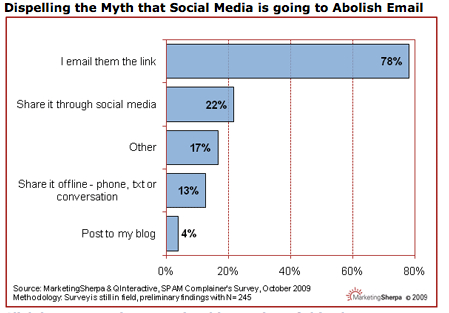 Between 2008 and 2009 the number of users on social-networking and other community sites jumped 31% to 301.5 million people. While this stat is technically true, many people who sign up for social networks are not on them as much as they are on email. In a recent study by First Monday: Peer Reviewed Journal on the Internet - of 309,740 twitter users, 211,024 posted 2x or more in 206 days. Oddly they describe this audience as "active users". A study by Harvard stated that 10% of active users account for 90% of all tweets. Industry expert and strategist, Jeremiah Owyang blogged a few months ago that “the actual active conversion rate will often range from 10-40% of actual users sticking around and using the social network, so don’t be fooled by puffed numbers.”

Many email users are connected to their email for a large part of the day whether they are at the office, using a PDA, etc. According to a study by Exact Target, “43% of Blackberry users and 42% of iPhone users report using email more often over the past six months, compared to fewer than 3% who are using email less often.” Currently there are approximately 139 million mobile email users, according to a study by the Radicati Group. That figure is expected to increase to over 1 billion mailboxes by 2013.

Leveraging email and social networks is a good engagement strategy for reinforcing the message.

While email still remains one of the more popular channels that nonprofits use to communicate with supporters, reaching them via multi-channels is critical to growing a nonprofit’s list and expanding its outreach. Messages should also be tweaked for each channel’s audience. For example, a 140 character fundraising pitch via Twitter would be framed much differently then a 300-word heart-felt email fundraising appeal filled with compelling photos or graphics. Also, different fundraising goals should be set because they are very different mediums. At the end of the day, nonprofits are still raising much more money via email fundraising appeals then they are through social networking.

So no, email is not dying. But if your nonprofit isn’t take advantage of leveraging multi-channel marketing to reach current supporters and recruit new members, then yes your nonprofit could be left in the dark.

Does your nonprofit know how many of its supporters read action alerts and fundraising appeals on their smartphone? It’s ...
Start Reading
Allyson Kapin 2011/2/22 3 min read

The worst kind of expert doesn’t share the whole story or truth. Since the rise of social media many “experts” have claimed ...
Start Reading
Allyson Kapin 2011/6/25 2 min read

Women are valuable stakeholder to nonprofits. They make contributions to twice as many charitable organizations as men do, and ...
Start Reading