Who Is Most Likely To Support Causes Online? Social Media And Ethnicity By The Numbers!

I have a quiz for you.

Who is mostly likely to support a cause or social issue online rather than offline:

Hispanics (39%) and African Americans (30%) say they prefer to engage with and learn about causes through social media, compared to 24% of Caucasians.  This is according to the new study, Dynamics of Cause Engagement conducted by Georgetown University’s Center for Social Impact Communication and Ogilvy Public Relations Worldwide.

While it’s wise to view studies in which people predict their charitable behavior with some caution, this study provides super useful insight into how ethnicities perceive social media and its effectiveness in catalyzing cause involvement.  For example, African Americans and Hispanics are significantly more likely to believe that they can help get the word out about a social issue or cause through online social networks (58% and 51% respectively, vs. 34% of Caucasians.)  Gender is also a factor. An earlier release of data from this study showed women are more likely to believe in the power of social networks than men.

The study also found that African Americans and Hispanics are more likely to feel that supporting a cause makes them feel like a part of a community and that it’s important that their family members are involved in causes.  They are significantly more likely than Caucasians to engage with causes through promotional social media activities like joining a cause on Facebook or posting a logo to their social profile.

For all ethnicities, supporting the troops, feeding the hungry and health-related causes topped the priority lists.  African Americans and Hispanics are more likely to be involved in the issues of diabetes, domestic violence, bullying, childhood obesity, Haiti relief and HIV/AIDS.

The takeaway for me?  Know your audiences!  This data is a great start – though even more important is reaching out to listen to your own constituencies.  People who want to spread the word are among your most important supporters.  Find them, get to know them and give them the freedom and encouragement to champion your cause. 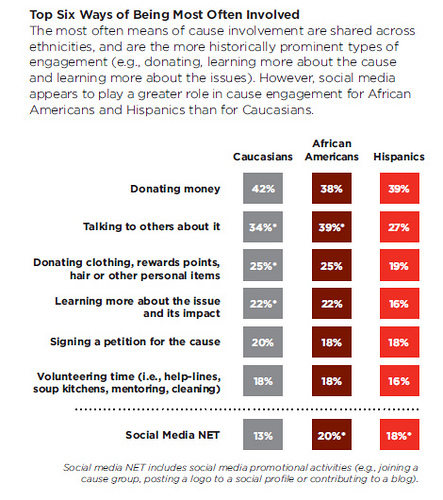 Social by Social: A Guide to Launching Campaigns Via New Media Tools

Useful Stats Every Nonprofit Should Know Moving into 2010

How Diverse are Social Networks?