Social by Social: A Guide to Launching Campaigns Via New Media Tools

Nonprofit guru Amy Sample Ward just co-authored a new book called Social By Social, which serves as a great “how to” guide on how to use technologies to create social impact. Nonprofits and their staff will learn to engage a community, develop a blog strategy, define key metrics, scale up activities and sustain projects via the latest tools. Furthermore, Social By Social document pioneers like Simon Berry who used new media to successfully lobby the Coca Cola Corporation to support African aid. 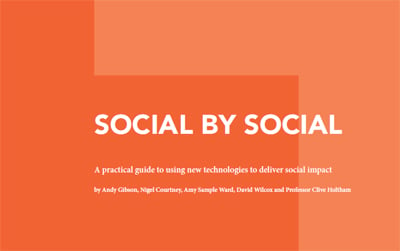 “This is the story of one man’s crusade to stem the terrible infant mortality rate in Africa, by persuading the entrepreneurial local distributors of Coca Cola to pop a phial of vital medicine into each crate. As an experienced social entrepreneur, Simon Berry used every communications technology he could to publicize his idea, including Twitter, blogging, Facebook, Flickr, YouTube, and a dedicated website serving as a focal point for media coverage and search engine traffic.

Within weeks, and at minimal cost, more than 2,000 people had signed up to support the campaign. All the content has been generated and donated by the participants. This persuaded broadcasters to take up the baton and attracted the interest of organisations in Africa – and Coca Cola itself. In just six months Simon’s idea became a social movement which caught the attention of one of the world’s biggest brands – an achievement that was confirmed in April 2009, when Coca Cola committed to trialling ColaLife in Tanzania.”

“Social by Social isn’t a manual in the classic sense. This work is still pretty new and there isn’t a simple model to follow. Instead, it asks you the questions which you will need to answer, shares some of the routes other people have tried, and offers signposts to help you find your way,” said the authors.

Has your nonprofit ever talked to your online donors about their donation experiences? Was the feedback positive? Negative? ...
Start Reading
Jocelyn Harmon 2010/5/18 12 min read

Slam Dunk or Snake Oil? Everyone wants to Raise Money with Social Media. But is it Possible?

Check out any nonprofit Web site these days, and in addition to an About Us page, you're likely to see icons for Facebook, ...
Start Reading
Allyson Kapin 2011/8/18 3 min read

Nonprofits, businesses, and entrepreneurs have been busy focusing on growing their social networking presence, but how valuable ...
Start Reading