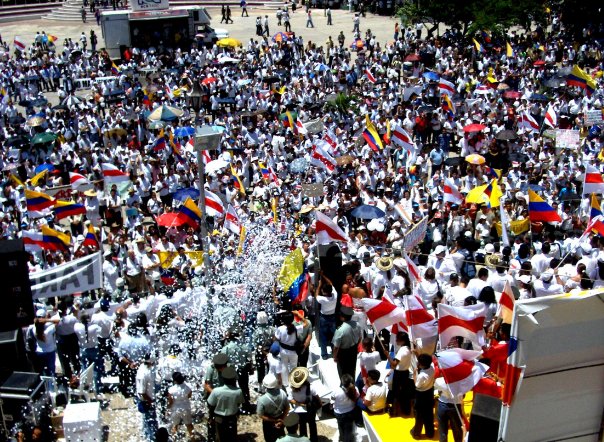 Need more proof of the organizing power of social networks? Look no further than the USA Today article covering a massive worldwide protest organized via a Facebook event that gathered close to 100,000 people in 165 cities around the world--all in less than a month's time.

Protesters united to take a stand against the continued brutalities carried out by Columbia's largest rebel group. Known as the FARC, the group is responsible for hundreds of kidnappings and continues to hold several high profile hostages.

The thousands who gathered wanted to send a clear message to the FARC to stop kidnapping and release the hostages they're holding. Though turnout was the strongest in Bogotá (where estimates range from 500,000 to 2 million people), the international scale demonstrates both widespread awareness of the issue and solidarity with the Columbian people.

This is a perfect illustration of the organizational power that Facebook and other social networks have. With over 64 million active users and 250,000 more joining daily, Facebook in particular can be an excellent network to use to plan and coordinate events, gather support for a campaign, increase publicity for your organization, or collect donations (though the jury is still out on this one).

Though the event's success is admirable, it is important to remember that not every Facbook event results in such an immediate hit. So what is the difference between events with excellent and mediocre turnout? There are some important questions to consider before launching your next campaign:

First and foremost is the cause itself. Is it appealing to a broad group of people or an issue that might interest only a smaller, select group? In this case, the protest was highly relevant to the daily lives of millions of Columbians, and was about an issue that has long been considered by the international community.

The next question involves the planning process itself. How much planning did the event take, how many organizers were there and how did they coordinate on an international scale? Was it more of a spontaneous individual effort, or something that involved coordination across continents?

If your event is going to involve funding, it might be important to consider using additional sources to help you raise money. Facebook has not always proven the best tool for bringing in donations.

Unfortunately for you, (and for us) there is no formula for instant success. The best we can do is use the variety of tools available to connect with as many people as we can. Fortunately for you, we are here to keep tracking what works, what doesn't and what innovations in social networking are looming on the horizon.