Despite all of the delayed campaigns, lower donations, budget-cuts, and general angst caused by the economy, major gift fundraising is still happening. Of course it is only happening for organizations that are staying engaged in the major gift process. The old maxim “if you don’t ask, you don’t get” is more true than ever as donors stop their impulse giving and move towards a more thoughtful approach that focuses their diminished capacity where they can receive the maximum return on their philanthropic investment.

In this difficult giving environment the web is positioned to play a more significant role in raising gifts in the mid to high range of your program. Studies like “The Wired Wealthy” helped to prove that larger donations can be effectively raised online and universities who have always led the way with major gift fundraising are now asking, and receiving, high-five and low six figure online gifts. It is understandable that the preferred measurement of success is money because it is tangible and undeniably important. Yet to fully understand the web’s full impact on major gift fundraising you must look at its intangible effects. First among these is the influence your web story has on a major gift donor’s decision to support you or not.

In the chart, “Usefulness of Charity Web Sites in Deciding to Give,” The Wired Wealthy study, produced by Convio, Sea Change Strategies, and Edge Research, segmented the wired wealthy into three clusters:

1. Relationship Seekers, those most likely to respond to opportunities to connect emotionally with your organization online;

2. All Business, those donors who visit charity web sites to donate, period; and Casual Connectors, those who occupy the middle ground between

3. All Business and Relationship Seekers. The chart below reflects those respondents who stated that a charity’s web site is very useful in making their giving decisions. 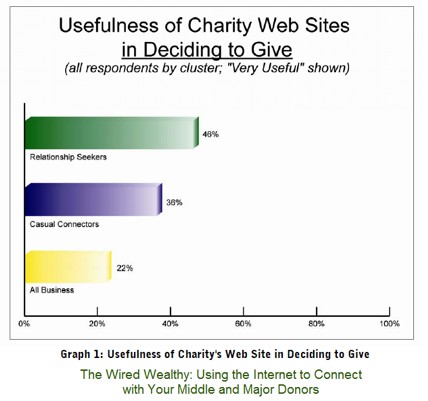 Additionally, your organization’s web story is so much more than your website. It is your e-mail communications, your social networking presence (or lack of it), your eEvents, etc. While there is still argument over whether or not older Americans do or don’t want to give online, there is no argument that they are active online.

In fact, according to the The Pew Internet & American Life Project, older generations use the internet more for information gathering than entertainment. For major gift fundraisers this means that decisions are being influenced by what is, or is not, part of the organization’s web story.

How much of your website is devoted to telling stories about what larger gifts can do for your mission? Do you deliver stewardship experiences to your major donors via the web? Can donors see both their online and offline giving via a secure portal? Do you have an e-mail strategy for major gifts like you have for basic acquisition and retention?

The early adopters of the web were the young and the wealthy: the young because it is fun; and the wealthy because it is a tool. Providing your wealthier supporters with the tools to better understand the impact they can have in achieving your mission will lead to major gifts and whether those gifts are given on-line or off-line should be irrelevant.

This article was written by David M. Lawson and Lori Hood Lawson, the Co-Founders of WorkingPhilanthropy.com.

The Online Giving Study: A Summary

Get Ready! Year-End Fundraising is No Joke for Nonprofits

My husband and I are ready to make our year-end donations.  We are poring over hundreds of mail pieces and gift catalogs we’ve ...
Start Reading
Ryann Miller 2010/9/10 4 min read

Happiness is a better indicator of philanthropy than wealth is. And we shouldn't be surprised.
Start Reading