Strategies to Manage an Online Crisis

Every organization makes mistakes. Of course some mishaps are bigger than others and can damage your reputation among important stakeholders like your activists, donors, and volunteers. A couple of weeks ago I had the opportunity to share my best tips for managing an online crisis, with Allison Fine, for a podcast on the Chronicle of Philanthropy. We had such a terrific discussion that I thought I would contribute my list back to the community. The next time your organization makes a mistake, use these tips to handle the crisis ASAP, so it doesn’t bubble up and explode.

First, it’s important to understand how an online crisis can unfold.

An online crisis can often start with someone at your organization publicly insulting your community. For example, when a consumer of the ice-cream brand Wilcoxson's asked, on Wilcoxson’s Facebook page, if the gelatin in their cookies and cream ice-cream contained pork, their CEO responded on Facebook with “we don’t deliver outside of Montana and certainly not in Pakistan.” That’s a pretty outrageous comment on the CEO’s part, and obviously upset the consumer. This CEO’s response also spread across social media and blogs and people began flooding the company’s Facebook page posting angry comments.  Eventually the company shut down its Facebook page and the CEO offered to resign.

Framing a campaign or situation that your constituents or the public did not think was an accurate portrayal is another example of how an online crisis can unfold. For example, when the first Kony 2012 campaign video was released bu Invisible Children and went “viral” it helped energize the organization's own constituents. However, many people in Northern Uganda (who this was ultimately about helping) felt that it over simplified things. It also portrayed the Americans need to “come in and save the day” because Northern Uganda could not take care of its own country and people. The campaign’s facts were also highly criticized by a lot of the media and bloggers.

Another common way an online crisis can unfold is when the person managing an organization's social media account accidentally posts personal commentary to the organization’s account. For example, when the Kitchen Aid staffer managing the Kitchen Aid account on Twitter tweeted during the 2012 Presidential debates “Obamas even knew it was going 2 b bad! ‘She died 3 days b4 he became president #nbcpolitics,” which referred to President Obama’s deceased grandmother, it caused the company great embarrassment and spread like wildfire. The popular blog, Gawker, deemed Kitchen Aid “the biggest loser of last night’s debate.”

Tips for Responding to Online Criticism and Attacks

If your organization can quickly take ownership of your mistake or failure, you can diffuse the situation before it implodes. One of my favorite examples of an embarrassing rogue tweet that was handled exceptionally well and quickly is from the American Red Cross. During the 2010 Snowmageddon storm, the Red Cross’s social media manager accidentally tweeted from the @RedCross account, “Ryan found two more 4 bottle packs of Dogfish Head’s Midas Touch beer… when we drink we do it right #gettngslizzerd." She quickly realized the tweet was sent to hundreds of thousands of @RedCross followers and responded by deleting the tweet from the @RedCross account and turned it into the following humorous response: 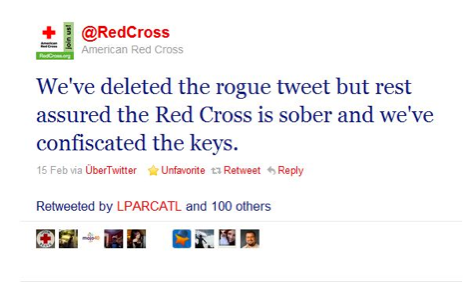 Then something incredible happened. The American Red Cross followers on Twitter began using the #gettngslizzerd hashtag to promote blood drive donations. And the company @dogsfishbeer, which was mentioned in the original rogue tweet, encouraged their own followers to support the Red Cross.

Two nights ago I took an Amtrak train up to Baltimore for the Grace Hopper Conference. When the station manager announced a ...
Start Reading
Allyson Kapin 2009/7/8 1 min read

We know the drill: nonprofits tend to be short staffed when it comes to social, especially this time of year, but it’s crucial ...
Start Reading