People have been silenced throughout time by media outlets, governments and authority figures who strive to keep minorities and protestors at bay. Social media may be changing that across the globe. Are Facebook, Twitter and YouTube creating an online democratic world where democracy does not exist otherwise? Women in Iran and protestors on Wall Street think so. 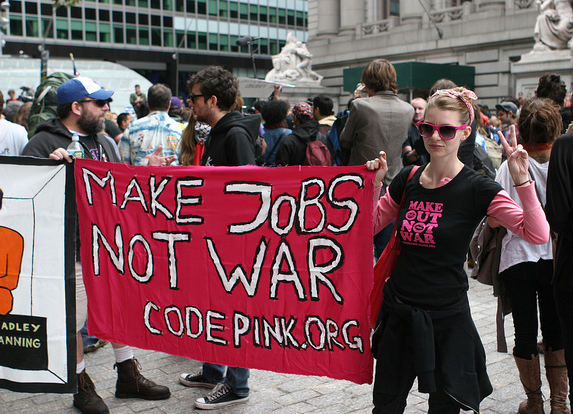 During the Iran protests in February of 2011, a woman who was raped, sexually assaulted and beaten once she was identified as a "rioter" simply for voting, had no voice and little way to speak out about her experience. But she did have social media outlets like Twitter and YouTube.

In the U.S., we tend to take our first amendment rights for granted until they are revoked. Without any legislation to grant women in Iran speech of any sort, social media is an anonymous outlet for these women to let the world know what happens to them. A few questions that this raises: Will this freedom of speech be dangerous for women in Iran, and other countries that stifle women's voices with violence? Will these women be tracked down? Can social media actually save lives and create a voice?

Harassmap seems to believe the latter is true. Harassmap is a project that utilizes open-source mapping technology to allow women to report incidents of sexual harassment by sending a text message, an email or employing the Twitter hashtag, #harassmap.

"It enables women to share their feelings anonymously but it also helps highlight the problem more, to bring it into the media spotlight and make the issue heard," says Harassmap co-founder Engy Ghozan.

Protestors fighting against Wall Street are using Twitter and the hashtag #OccupyWallstreet to garner attention and highlight corporate corruption and financial greed. One Anonymous figure from the Wall Street protests, by the name of "Jackal", says:

"This is a new way to protest. Many of us have done our fair share of street protesting. But they drag us into the streets, and they mace us. Now we have brought our protests into the online social media space. We do it all at once – the street protesting along with our distributed denial of service [DDoS] attacks. We are a bit of an online flash mob."

While groups and movements are still struggling to amplify their voices, groups such as Anonymous, are also using social media to help activists spread their message more efficiently. People are now able to speak out and share more ideas and experiences via the internet, though the free speech and protests tend to invite some authorities to shut down any demonstration that they do not approve of, but hacktivists as they call themselves, are ready with a reaction. They created the social media platform, U.R.G.E.: Universal Rapid Gamma Emitter, whose purpose is to generate a broader audience range for activists.

Anonymous—the hacktivist group that created U.R.G.E.—says in reference to the Wall Street protest police brutalities, that if they hear of any brutality caused by the NYPD,

“...we will take you down from the Internet as you have taken the protesters’ voices from the airwaves."

And they mean it. In August 2011, a group that identified with Anonymous shut down San Francisco's BART public transit system's website after BART cut off all mobile phone service to prevent a projected protest. The impending protest would have been via cell phones and social media. The act of discontinuing cell service was potentially illegal since the 1967 California Supreme court ruling that determined cities cannot stop protests in train stations. Anonymous not only shut down the BART website, but used the hashtag #OpBART to spread the word and protest the actions of BART.

This wide access that has been created and sustained by social media platforms are also outlets for non-profits as a means of crafting and sharing movements globally. Twitter, Facebook and YouTube allow organizations to provide people who often do not have the means to be vocal and honest - a space to foster awareness and activism. Situations that are often hidden and shamed are now being revealed and spoken about. Without social media, the woman in Iran would have never been able to share her story globally, and the power of storytelling is immense. It seems that social media truly has become a worldwide, democratic revolution that gives a voice to the silenced.