During conference season, the tech and social media community gets really excited about “break out” products and apps. In 2010 it was location based apps like Foursquare and Gowalla. This year the buzz is about group texting, which allows users to text up to about 25 people at a time via a mobile phone. TextPlus, a group texting vendor says they have 7.7 million monthly users. For comparison sake, Foursquare, recently hit 7 million users, according to TechCrunch. GroupMe, another group texting company says that 200,000 texts go through its system every day.

Yes! Group texting could make nonprofit campaigners lives a lot easier in communicating quickly and more efficiently with key staff. For example, if you are organizing a field event and need to keep in touch with 15 organizers the day of, group texting would be a great option to stay connected, answer questions, and deal with logistics. Or perhaps you are attending your organization’s biggest fundraising event of the year, and need to be in constant contact with your fundraising team and board members who are doing a lot of networking to raise money. Forget ducking into a corner to find a quiet spot to call staff. Loose the retro walkie-talkies.

If you’re a first time user, create an account with a service provider like Groupme or Fast Society 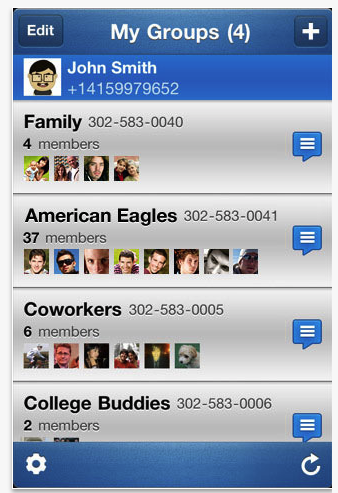 (see list of server providers below) and download their app. Users can usually create an unlimited number of texting groups via smartphones, a standard mobile phone using texting commands or even online through the vendors website. Invite others to join the group by typing in their names and phone numbers and start texting away.

When you add people to your group they will receive a text message from the service provider notifying them that they’ve been added to your group. They will also be able to view other group members. Every time you and other members send a text, the entire group receives the text message so remember not to abuse it with unnecessary messages because you want people to find it useful and not tune you out. You can delete the group at any time.

All of the group texting service providers offer similar services but in the race to become the most popular, there are also some slight differences.

Groupme: Groupme is one of the more well-known group texting service providers. They recently made major improvements to their interface and UX. They also allow photo sharing within groups for smartphone users as well as location sharing. Users can also host conference calls on the fly. And if the back and forth texting gets too much, users can “mute” a conversation and catch up later on the web archive.

Fast Society:  Fast Society positions itself as the edgy and hipster group texting vendor on the block. After all, it was originally built as an app for party people and concert-goers. The registration is super short – just type in your mobile number and invite some friends. Groups are referred to as “Teams” on Fast Society, run for 1-3 days and often revolve around an event. Like Groupme it also lets users make conference calls and has geolocation built in. In March they revamped their Iphone App and launched a new app for Droid. They have channels that let users talk to up to five teams at a time. Their new “rally” feature could be a great tool for online advocacy, particularly when mobilizing supporters to attend offline events. For example, if  nonprofit campaigners were organizing a lobby day, they could invite super-activists to attend. Those who decided to join would then automatically be grouped into a new team.

textPlus: Nonprofit campaigners will dig textPlus. They recently launched Groups4Good, a monthly campaign where $1 is donated to charity after a new group is created on their platform. textPlus  will give up to $1,000 to charity. In March they donated money to EnoughIsEnough, A Good Idea, and LIVESTRONG.

textPlus is now crowdsourcing the charity selection process with its users through its. "Within the Groups4Good Communities Channel.

Disco: Disco is Google’s Group-Texting Web and iPhone App that of course has the added benefit of easily integrating with all of your contacts on Gmail, etc. Once the group is setup, users can text the group using the phone number that Disco assigned to them. On the web side, the interface correspondence looks similar to instant messaging.

Beluga: The biggest news to come out of Beluga is that Facebook recently acquired them. “What is unusual is that Facebook does not plan to shut down Beluga, as it typically does when it buys tiny start-ups. This is a sign that its technology may live on as part of something within Facebook--perhaps a group-messaging service of the social network's own. Messaging and mobile offerings are two things that we know Facebook is continuing to update and improve,” according to CNET.

Twilio: What separates Twilio from the pack is that it’s an API that powers some of the back-end for GroupMe, Beluga, and Fast Society. Developers interested in building mobile apps should definitely check out Twilio’s API. However, there is some speculation that the vendor and developer community find their prices too high and that some of their customer base will look to alternatives and less expensive options or perhaps invest in building their own.

Be Aware of Extra Fees

Most of the group texting service providers let users toggle back and fourth between getting SMS texts and receiving notifications through the provider’s app. Be aware that messaging and data rates may apply depending on the users contract with their mobile provider.

3 Ways to Take Advantage of Texting for Your Nonprofit

This global pandemic has affected us all, including your nonprofit and its mission. With unemployment rates rising and the ...
Start Reading
Allyson Kapin 2011/2/22 3 min read

The worst kind of expert doesn’t share the whole story or truth. Since the rise of social media many “experts” have claimed ...
Start Reading
Allyson Kapin 2011/11/15 3 min read

How Influential is Mobile Fundraising?

People like to donate money around the holidays, and with Thanksgiving right around the corner, year-end fundraising is about ...
Start Reading