The 2011 Nonprofit Social Network Benchmark Report provides some incredible data on how 11K+ nonprofits are using social networks such as Facebook, Twitter, LinkedIn, and others. The study also answers the biggest question on everyone's mind. Are nonprofits raising any money on social networks? 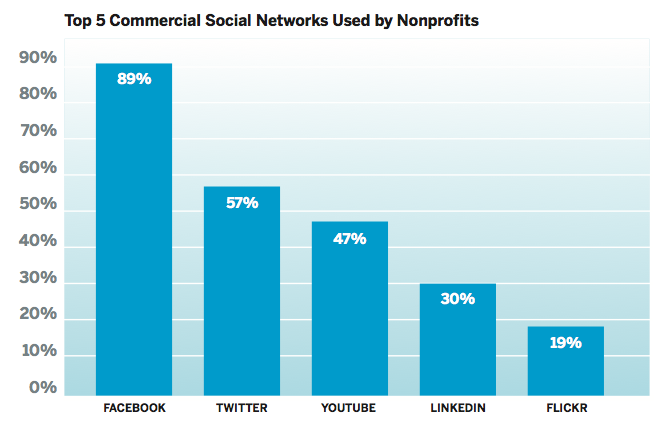 Though it's assumed that Social Networks, besides MySpace, just keep growing, it's the amount of growth that may surprise you. Facebook has increased its community by 161% in 2011, and while Twitter is not used as often by nonprofits, the Twitter community only grew 2% in 2011 - not a drop in the bucket to its 535% growth from 2009. While the usage isn't static across the board, the majority of nonprofits (4 out of 5) agree that their social networking efforts are valuable to their growth and community engagement.

For the first time this year, quite a few newbies were added to the list of Social Network platforms: FourSquare, Jumo, Vimeo, Yelp, Picassa, Ning, Delicious, CrowdRise, FirstGiving, Razoo and Causes. FourSquare had the most substantive presence among the newcomers with 4% of nonprofits utilizing the platform.

The study also highlighted "Master Social Fundraisers" which consisted of organizations that raised more than $100,000 on Facebook over the last year. It was a shock to see that 30% of these Master Fundraisers were considered small organizations. The average Facebook following of a Master Social Fundraiser is more than fifteen times the general average, at 100,000 fans. This isn't by luck, though. Of the Master Fundraisers, 30% dedicate at least 2 staff members to managing and fundraising their social media presence--compared to merely 2% for the rest of the industry. Though, it seems to be pretty unanimous across the board: 94% of organizations reported that they will keep their staffing allocations the same or increase them over the next twelve months.

This report shows that there is absolutely a correlation between the size of the organization and their social networking community. Naturally, it's easier for a larger organization to fund and train staff on the importance of engaging with social media.

Looking at all of the data from this study, how do you think your nonprofits social media presence measured up?

I have been waiting to get my hands on the latest 2012 Social Networking Benchmark Report because it’s one of the only ...
Start Reading
Allyson Kapin 2012/2/11 3 min read

Ever since social media was deemed the coolest communications channel on the block, nonprofits are continuing to question what ...
Start Reading
Allyson Kapin 2010/9/12 4 min read

How Useful is Social Media to Nonprofits?

No matter where you look, social media is on everyone’s radar. The big question nonprofits ask is, how useful is social media? ...
Start Reading