Lions and Tigers and Bears! Oh, My(Space)! The Fears People and Organizations Have

The following post is excerpted from "Share This! How You Will Change the World with Social Networking," a new book from Berrett-Koehler by technologist and nonprofit consultant Deanna Zandt. 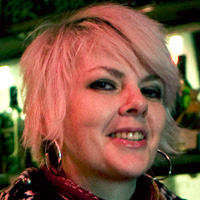 When fear of technology makes us hesitate, or holds us back altogether, the conversations about social change continue on without us--without the benefit of our experiences, values, and knowledge.

Those who are reluctant to use social networks to effect change also frequently express fear over lost privacy. The challenges we face in maintaining some semblance of privacy while participating in the larger social movement can certainly seem overwhelming. We're communicating more frequently and more openly with people with whom we may not yet have forged alliances in our own spheres. Talking to strangers--what you've been told you're not supposed to do since you were a child--may also make us feel vulnerable as we share who we are as part of the work of change. Rinku Sen, executive director of the Applied Research Center and coauthor of The Accidental American: Immigration and Citizenship in the Age of Globalization (Berrett-Koehler Publishers, 2008), points out that these risks are similar to the risks that people working in social justice movements have always experienced; only the scale and intimacy have changed. "That need to address our fears and protect ourselves is a part of doing politics," Sen argues. "The medium is different, and you can hear from strangers more often, but the fear itself is not different. It's legitimate in both places." While the fear feels different because it's related to new technology and experienced in a way that we're not used to, it's the same fear that proponents of social change have always had to confront.

When choosing to do work that's changing the world, even if it's only contributing your life experiences and values to public conversations (which can be risky for some people), examine your network and ask the people in it to support you in the scarier moments. Sen urges potential organizers to have a frank conversation with their community--and themselves--about what level of risk they're willing to take. "It's better to take a risk when you have a lot of people around you watching what's happening than if you're by yourself," she advises.

Other activists have found ways to balance caution and sharing as well. DREAMActivist.org, for example, enables students using social technologies to share stories of undocumented young people who face possible deportation despite the fact that they've grown up in the United States. These students recognize the political danger associated with online activism, but it doesn't stop them from using social media to help folks understand complicated legislation. On Twitter, their postings have become a rich resource of news related to immigration issues.

Let's be clear: Most of us don't have to worry about severe political consequences of speaking out online. But each of us has our own valid concerns that need to be addressed. Every new technology shift inspires anxiety about how our lives will change.

Privacy fears are common; so are fears of reprisal. Will you encounter people who are rude or who seem determined to disagree with whatever you write? Maybe. Should this stop you? Absolutely not.

Remember that social networks generally provide a safe space in which to share our experiences. More often than not, sharing creates empathy, and through that empathy, each connection we make becomes part of a network of allies to call on when things aren't so pretty.

*Deanna Zandt is a media technologist and consultant to key progressive organzations; she is the author of "Share This! How You Will Change the World With Social Networking" (June 2010, Berrett-Koehler.) http://deannazandt.com/