Where Do People Turn to for Election and Political News?

Folks, as you may know, I've been doing a lot of work with good orgs who are doing factchecking work and voter protection. With the big election coming up in November, news outlets are increasingly covering campaign stops and primary results. The craigconnects team commissioned a national survey of likely voters to find out the real deal about what they look for in a news outlet, the trustworthiness of news outlets, and their opinion about the effect of social media on news quality. Check out the infographic to see the survey results. 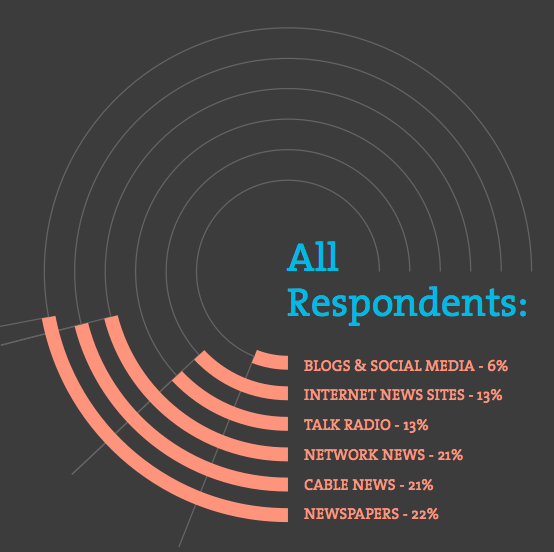 be of interest to the community.

After analyzing the results of the survey, we discovered that likely voters are looking for news they can trust, but are torn about where they can find it. I'm not in the news business and I won't tell anybody how to do their job, but I am a news consumer and I'd like to know I can trust the news I'm getting. This is especially important for nonprofits when it comes to choosing where you get your campaign info.

We broke the results down by sex, race, age, and party:
• The data set only focused on people who identified as White, Black, or Hispanic. The data we had for other demographics such as Asian and Native American were such a small sample size that all answers for these subgroups are not considered statistically significant.
• Age was broken up by 18-35, 36-44, 45-64, and 65+.
• Party was broken down by Democrat and Republican.

Some of our findings confirmed our earlier expectations:
• “Traditional” news outlets scored highest in terms of perceived credibility compared to newer and less traditional mediums.
• Democrats are more likely to give cable news and network news a higher rating.
• Republicans have more faith in Talk Radio then Democrats.

As for social media:

• Younger people give more credibility to social media vs. older adults, which confirms people’s initial thinking, BUT neither really giving high scores for social media usage to get their news.
• Non-traditional media such as Internet news sites, blogs and social media sites scored far down the list as being credible.
• College grads are slightly more cynical about social media then non-college grads.
• Democrats were a little more positive about social media, but not significantly.
• There were some differences in Hispanics vs. Whites and Blacks – Hispanic people tend to be less enamored with news sources, and are going to social media for it.

Most people aren't getting hard election news from social media. I think tech folks and early adopters are, but not most people, not yet. Though it seems that more and more nonprofits are using social media each day.

We discovered some cool new stuff, too:

• Cable news stations were the top source of news for 33 percent of respondents.
• Newspapers scored the highest in credibility with 22 percent.
• Less than one quarter of the population would describe any source of election news as very credible.
• Talk radio, often cited as influential on political news, scored only 13 percent as very credible.
• 13% of Republican women and 11% of Republican men think that newspapers are very credible, with twice that: 28% of both Democratic women and men think that newspapers are a very credible source for information about voting.
• Blacks give more trust to news sources and Whites fall in the middle.

Interest-based efforts hold great promise for helping ensure trustworthiness and boosting public confidence in news reporting. It's called factchecking, and thankfully there are a lot of good people working on it. They're looking at ways to help the news media hold candidates and other public figures accountable for what they tell the public, which is often tricky. Factchecking is hard, and it's expensive, but it's really important.

The survey interviewed 1,001 likely voters nationwide. Interviews were given by land-line and cell phone from January 10 – 12, 2012.