New Study: Investing in Facebook is a Waste of Time

For the past few years, nonprofits have spent a lot of resources on building their Facebook page presence. Many social media strategists and the media told nonprofits and businesses that email was dying and that FREE social networks like Facebook would be king of communications. So it's now 2015 and guess what? Email is definitely not dead and in fact it raises a heck of a lot more money than any social media platform. In addition, the majority of nonprofits still haven't raised a dime on social media. So is Facebook still worth it? I think it depends on your goals with Facebook and if you have the funding to pay to play.

A study conducted by Forrester found that posts from top brands on Facebook and Twitter have an awful engagement rate. Only 0.07% of followers actually interact with those posts.

According to the New York Times, Facebook has aggressively promoted its advertising products (like pop up ads that appear on users’ mobile phones urging them to install a new app...Facebook Messanger, anyone?). In the third quarter alone, Facebook reported a 64% increase in advertising revenue to $2.96 billion and said ad prices rose 274% year over year, in part reflecting strong demand from advertisers. 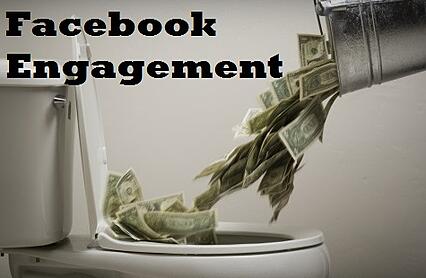 Brian Boland, a Facebook Vice President who oversees marketing of ad products, said Facebook surveyed hundreds of thousands of users, who complained that they were bombarded with useless promotional posts in their news feeds. While some of those useless posts were paid ads, about 2/3 of them were posts from brand pages. To appease users, Facebook decided to downgrade their chances of showing up in the news feed.

“Facebook is basically saying that their algorithm will be the arbiter of what’s promotion and what’s not promotion,” Jordan Bitterman said, chief strategy officer for North America at Mindshare.

So, it's pretty much a gamble whether or not Facebook will decide if your content is going to perform well. Since nonprofits don't have money that grows on trees, it's worth it to invest in engagement where you know it will count. I would invest in increasing an organizations email list over investing in Facebook ads or boosting posts or spending money on promoted Tweets in Twitter. However, if your organization has the budget to do both, you could spend money on list growth and also spend a bit of money on testing important advocacy related posts on Facebook to see how they perform.

So the next time a social media strategist tells you that email is dead, you can now tell them that email certainly isn't dead. In fact, it's very much alive and well. "Your emails get delivered more than 90% of the time, while your Facebook posts get delivered 2% of the time," writes Nate Elliott, Vice President and Principal Analyst at Forrester. "If you have to choose between adding a subscriber to your email list or gaining a new Facebook fan, go for email every time."

Where will you invest your engagement in 2015?

People are lacing up their sneakers, hitting the pavement and supporting  many worthwhile causes across the world.   AIDS ...
Start Reading
Allyson Kapin 2016/3/30 4 min read

Keeping Up With the Social Media Tide

We all know there’s a whole sea of shiny objects out there, and new apps are released every single day. And while you’re still ...
Start Reading