This is brief case study from a test campaign run by Media Matters with Care2 in December of 2005 to oppose the contract renewal of CNN's commentator Bob Novak. They used a strategic combination of online messaging to bloggers, press releases, messages to thousands of Care2 members interested in Media and Culture, and offline action to maximize their impact. Five thousand Care2 members quickly signed the petition, which was then hand delivered to CNN. Three thousand of these Care2 members also joined Media Matters' mailing list, and Bob Novak did not return to CNN.

Media Matters is well-known as a media monitoring organization, but we want to make more people aware of our advocacy efforts and get their help with stopping conservative misinformation.

We knew that Robert Novak's contract was up for renewal at CNN and that there was an opportunity to apply public pressure against his retention. Given Novak’s status as a well-known right-wing pundit, this would be a
good "gateway" action for people who might not otherwise be aware of issues involving media activism.

We hadn't done a project with Care2 before but were familiar with Care2's ability to mobilize environmental activists, so we wanted a small project that would let us gain experience and see how Care2 members would react when presented with our issues. We worked with Care2 to identify a reasonable size for this initial venture and set up a petition so people could easily sign up to oppose Novak's contract renewal.

This is the action alert sent by Care2's campaign team to Care2 members:

Although our campaign was late in the year and we were starting our annual fundraising push, we made sure to exclude these new activists from our regular outreach -- it wouldn’t have been the right way to start our new relationship with them. Instead, we focused on raising their awareness of conservative misinformation through action alerts and our weekly newsletter. We also made sure to give them feedback on their first action. Our initial message updated them on the action (included pictures of us delivering the petitions):

We look forward to hearing their response, and we'll be sure to let you know whether Novak's contract is renewed. To read more about Novak's history of misinformation, please click here.

Also, per your request, we've added you to the Media Matters Action mailing list. As a member of this list, you'll receive periodic action alerts that will help you take action to stop conservative misinformation in the media.

Together, we're making a difference!" 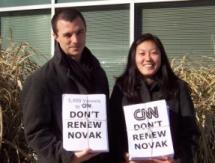 We think the combination of this initial communication and the fact that we were able to report a success later on, when Novak's contract wasn't renewed, helped contribute to our high retention rate.

Overall, we were impressed with the speed with which Care2 was able to mobilize activists for our campaign to unseat Bob Novak from CNN. Given our positive success with Care2 activists, we're definitely interested in exploring more initiatives with them in the future.

How Social Media Savvy are Members of Congress?

Lessons Learned When Your Community Revolts

Today (Tuesday, Oct. 26th) at the Convio Summit in Baltimore I joined Chris Burley of Defenders of Wildlife in a session to ...
Start Reading