How Social Media Savvy are Members of Congress?

What the study doesn’t say is how are offices verifying which of their Twitter followers or FB fans are real constituents in their Districts? While yes, this maybe great news for nonprofits who are looking to put Members of Congress in the hot seat in an accountability campaign, it’s nonetheless concerning that Members of Congress maybe using social media to gauge public opinion from people they don’t even represent.

I found this particular statistic interesting. Social media is a fluid and organic space. It’s not a space where you can easily control messaging nor is that a very “social” attitude. People can take your message and do as they see fit. Of course if you have a good team in place, they can help get your message out and respond to criticism.

Naturally, it’s the social media managers who (who are social by nature and focused on engaging constituents) have a more positive view of constituent communications than senior managers or staffers who are primarily tasked with answering the mail. “68% of social media managers feel email and the Internet have made Senators and Representatives more responsive to their constituents, compared to less than half (46%) of the senior managers.” The foundation’s report from February of 2011 said that 87% of staffers thought email and the Internet have made it easier for constituents to become involved in public policy. 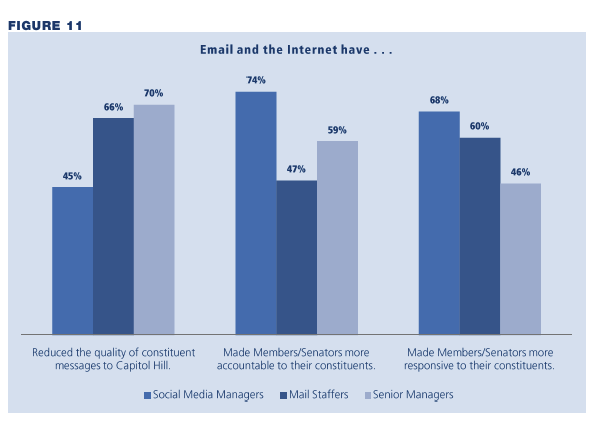 For the record, I agree with these staffers. The more transparent Members of Congress are using email and social media combined with other mediums the better constituents are served and communicated with.

Useful Stats Every Nonprofit Should Know Moving into 2010

Let’s face it, the world is no picnic these days. We’re facing climate change. The world’s oceans are on the verge of being ...
Start Reading