If you are a social media data junky, then you are in luck because M&R and NTEN recently analyzed Facebook statistics for the 40 organizations surveyed in their 2011 eNonprofit Benchmarks Study. They categorized organizations as small, medium, or large, based on the number of fans their pages have, and also looked at groups by sector. 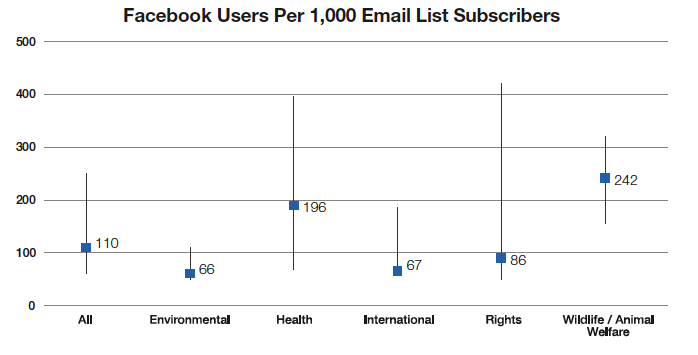 Opting out – Unlike your email list subscribers, Facebook page users can opt out of receiving your posts in their news feed while still being counted as “likes.” The study used both opt-outs and “unlikes” to calculate churn rates. These varied only slightly by sector, and not at all by organization size, with the average for churn rate at 14%.

In a future study, it would be great to see if there is a correlation between frequency and/or quality of posts and opt-out rates.

Popularity is a feedback loop – Facebook presents users with content based on the pages and other users they interact with most often, on comments and “likes,” and on how timely the content is. This is true not only in the “Top News” feed, but by default in the “Most Recent” feed as well. The more likes or comments your posts receive, the more likely they will show up for more of your users, leading in turn to more impressions, comments, and “likes” from a wider audience. Well-written posts that encourage interaction will help your message get to more people.

Posts vs. page views – It’s significant that most people don’t visit a page often after “liking” it – in fact the number of actual page views per 1000 users was very low at 4-7 per day. That means if you want to increase your page views, or if you’ve invested in custom tabs for your page, it’s important to make your posts compelling enough to bring people back to the page itself. Brian Carter, found similar stats when he analyzed  consumer based businesses fanpages and reported his findings over at All Facebook.

Amassing Facebook "Likes" has become so popular among nonprofits these days that Care2 has even begun selling Facebook "Likes" to nonprofits for a fee of 75 cents per Like, in guaranteed quantities. Here's how it works. You tell Care2 how many "Likes" you want them to recruit for you -- all on a voluntary basis -- from among Care2's 16 million members, who take action every day to support causes and nonprofits. Then Care2 creates a contextual, email-driven campaign, sponsored by the nonprofit client, to drive this quantity of Facebook "Likes" to you. The campaign usually reaches your goal in a couple of weeks, depending on how ambitious you are.

If you want to learn more about Care2's new Facebook "Likes" service, just fill out the form at left and a member of our team will contact you.

So now that you’ve had a chance to see some of these numbers broken down, how does your organization measure up?

With this information, what methods will you use to improve your impact on Facebook?

On Wednesday, Facebook rolled out a subscribe feature that should be of interest to nonprofits because it may make it easier ...
Start Reading
Allyson Kapin 2013/4/11 4 min read

A few days ago, I reported some of the juicy details from the 2013 eNonprofit Benchmarks Study that was just released showing ...
Start Reading
Allyson Kapin 2012/3/23 1 min read