Everything You Wanted to Know About Binders Full of Women

As voters watched the heated 2012 Presidential debates last night, there was a flurry of discussion and commentary happening on social networks like Facebook and Twitter. But things got even more interesting when Romney began discussing women's issues and in particular fair pay. Romney said that while he was Governor of Massachusetts from 2003-2007 he looked through binders full of women to find qualified women candidates to serve in his cabinet. 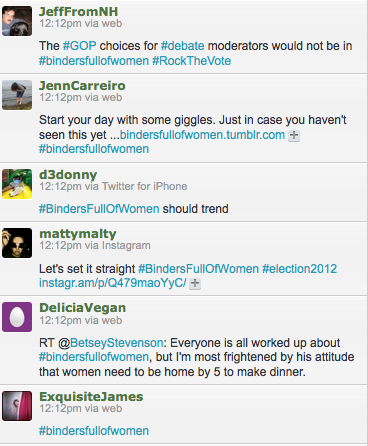 “I went to a number of women's groups and said, "Can you help us find folks," and they brought us whole binders full of women,” said Romney.

Within seconds the hashtag #Bindersfullofwomen and meme was brought to Internet life. Professional designers and novices began designing image macros with Big Bird looking through a binder of women, the famous photo of Hillary Clinton looking at her Blackberry with text superimposed that said “Romney still uses binders?” And of course there is one for actor Ryan Gosling that says “Hey Girl, I won’t put you in a binder.”

A Facebook page was also started that instantly attracted about 146 "Likers" a minute. As of this morning, the page has over 290K people who have "Liked" the page.

This meme is a terrific opportunity for women’s advocacy groups to do some creative campaigns. Hopefully we will see some of them rolled out later today. In the meantime, here is a list of Binders Full of Women resources to check out.

Is Your Nonprofit Cultivating Women Donors?

Is your nonprofit reaching women and harnessing their power for social change? If your nonprofit is not actively marketing to ...
Start Reading
Allyson Kapin 2011/6/25 2 min read

Women are valuable stakeholder to nonprofits. They make contributions to twice as many charitable organizations as men do, and ...
Start Reading
Allyson Kapin 2012/2/2 5 min read

Lessons Learned When Your Community Revolts

There are three pillars to building an online community and engaging on social media channels:
Start Reading