Care2 recently launched a month-long integrated advocacy campaign to empower women and girls. The budget and time-conscious campaign engaged and activated millions of people via online petitions, social media and other digital channels.

We spoke to Kelsey Bourgeois, Care2’s Advocacy Communications Specialist, to learn more about the key lessons she took away from spearheading this successful integrated campaign.

Q: Why did you pick "Empower Women and Girls" as the theme for this campaign?

I think in advocacy we often focus on all of the horrible things that happen to women and girls, such as sexual harassment and assault, female genital mutilation and blocked access to education and healthcare. For this campaign, we wanted the focus to be on the other side of the coin: Empowering women and girls through education, healthcare and birth control, legal protection and elevating female leaders’ voices. “Empowerment” sends the message that we want women to be able to live self-determined lives. We want to give them the opportunity to speak for themselves, act on behalf of themselves—and be completely supported in doing so.

Q: There were 15+ online petitions that were part of this campaign. What role did the petitions play into the success of the campaign? How important are petitions to driving change for important causes such as these?

The main goal of a petition is to rally signatures around an issue, to build a stronger case to push 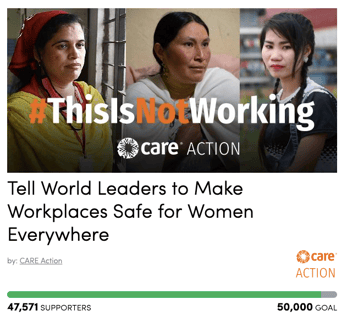 decision-makers towards a desired outcome. So they can be highly useful for driving action and change for issues pertaining to gender equality and female empowerment. The powerful people of the world are still subject to the masses, and that’s our job: collecting the masses to send a message to those powerful people. When the powers that be see how many people support a given cause, and not just broadly “women’s rights,” but specific issues from legislations to policies, many tend to pay attention.

That said, a well-distributed online petition can also serve as valuable educational material, raising awareness and informing people on important and timely topics.

For example, as part of this integrated campaign we had one online petition focused on saving the the Violence Against Women Act. This important piece of legislation was put in place to support victims of sexual assault and domestic violence. Before seeing our petition, a lot of people didn’t realize Congress hadn’t renewed it. When they learned it was a problem, then used their voice (i.e. their signature) to tell Congress that is unacceptable. Over 38,000 people signed this petition, and in part due to our public pressure on Congress, we have seen the re-introduction of that legislation—with new portions that would prohibit convicted stalkers from purchasing firearms.

We chose the 15 online petitions we used for this particular campaign very carefully. We wanted to make sure that people who signed on would have exposure to a lot of different causes they may not have even known about before joining. For instance, many people know that sexual assault is common on college campuses now. Not as many may realize that female genital mutilation is legal in the U.S. Having a range of causes targeted allowed us to turn people who are interested in one of these causes into people who are interested in even more.

Tapping into existing networks is really important. Partnering with organizations working on the same issues is another huge asset. We have a huge following on all social media and in our email lists and so do our partners. But posting to social media organically only costs as much as the worker’s time who did it does. So thinking of smart ways to cross-promote among partner organizations is a really important and really inexpensive way to broaden reach. We all have the same goal and acknowledging the experts, both individuals and groups, on any given topic only helps lift us all up. Along the lines of organic posting, it’s very easy and inexpensive to use hashtags: both to brand our efforts (#Care2Empower) and to jump in on already existing discussions and passionate folks (#MeToo).

Also, to be heard in certain circles, it can be useful to establish yourself as a known advocate with a history of standing up for a certain cause. Care2 has been working on empowering women and girls for many years in a wide variety of ways. We have supported outing powerful abusers and ending sexual violence, but we have also done some more unique things like ending sexist school dress codes and supporting the decriminalization of sex work. Because we pay attention to, listen to and elevate the voices of people from smaller, niche, communities, we are able to have a wider reach.

For this campaign, we really wanted to see what we could do with Instagram. More and more people are using Instagram as their primary social media platform, especially for activism. We had Global Fund for Women “takeover” our Instagram twice during the month; their message and petition was all about amplifying the voices of female leaders and activists and the response to that was really strong. We also did two Facebook Live events for this campaign. The first was with CARE Action and focused on asking world leaders to make workplaces safe for women and girls, which is a huge factor in creating economic equality. We found that while a lot of people support the idea of ending workplace harassment and assault, they didn’t understand before this event that there was a global organization - the International Labor Organization, which is made up of 183 countries - that may actually be passing a treaty this summer doing just that. The second Facebook Live we did was even more timely given the current assault on abortion rights here in the US. That was with Marie Stopes International and focused on the global gag rule, which is a U.S. regulation stating that they won’t fund any group that does anything related to abortion. Since abortion is healthcare, this essentially defunds some really important international aid efforts.

The thing we learned most from the Instagram partnerships is that they are extremely mutually beneficial for both groups. The thing we learned from the Facebook Live’s is that when we have compelling speakers from expert groups on a given topic explaining things simply, we can get folks really excited about ideas and causes, which in turn converts into donations, direct action and widespread awareness of organizations.

Q: You spearheaded this successful campaign. It seems like a lot of work. How does your small team manage all aspects of a multi-channel campaign like this, to get results in just one month?

Yes! It was a lot of work. But our little team is full of extremely passionate people. In short: it’s a balance between careful planning and quick thinking during the campaign. For months in advance, we met with people from across Care2 specializing in different things to be sure that the person with the most expertise on a given channel or strategy was consulted about our efforts. It was up to me to create a schedule of promotions and efforts and then ensure they all went to plan, but honestly, our team doesn’t take a lot of managing because everyone is so good at their job and such strong communicators when they need help. For the few hiccups or planning changes that come with any multi-channel campaign, the team showed incredible flexibility and commitment to getting things done in the best way possible. 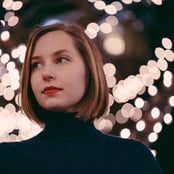 Kelsey Bourgeois is an Advocacy Communications Specialist at Care2. Kelsey is passionate about direct communication, evaluating internal organization processes to increase efficiency and efficacy and generating meaningful conversation and community engagement around gender equity and mental health awareness and justice.

Kelsey is based in Chicago with her partner and their rescue pitbull, Linus.