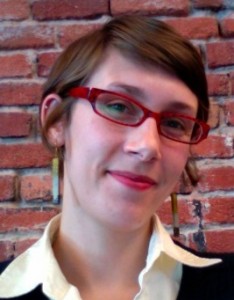 Whether it's political or personal, global or local, funded or a grassroots effort, organizations and communities are campaigning for change in many ways, all of the time. Unfortunately, there are times when we lose focus on our ultimate goals for change and instead fixate on the campaign itself or let a concept for engagement overshadow our real calls to action. When we do that, we can compromise the relationship we have with our supporters and donors, and limit our capacity for building momentum towards action and a movement for our cause. But, it doesn't have to be that way!

When building a campaign and exploring your options for the structure, actions and engagement pieces, look first at your organizational metrics. What do you measure every day, week, month, year? What do you point to when funders, donors, board members and the community ask if you are making a difference? How do you evaluate your programs and services? Those metrics and goals are the best resources for identifying the focus and the calls to action for your campaign.

For example, if you are an organization working on public education policy changes, you probably recognize teachers as a core demographic to your work - both in supporting the changes you propose as well as helping identify the changes that can and should be made. Maybe you want to run a campaign for awareness around one of your proposals and want to showcase teachers in the process. Asking supporters to take an apple to their teacher may sound like a fun call to action - it engages students and parents in any grade level, is a simple and straightforward ask, and has teachers at the center. But how does it help you move closer to your goal?

Instead, what if you asked students to finish the sentence "My teacher deserves an apple because..." Whether people respond with pictures, video, or text you have engaged them at the same degree as you would have with the apple, but you also have all of those responses that you can aggregate and share back in real time, bubbling up the energy of all those participating and following along. You also have media of various kinds that you can use in messaging, calls to action, and in the advocacy for your work in front of teachers, administrators and ultimately policymakers.

What's your organization's story? You have one. It's the story you tell in a grant application, on your website, in an elevator, and to a room of volunteers getting ready to help you with a project or event. As much as your goals and metrics will help you identify the actions your campaign can focus on, your story helps you identify where the campaign fits in your work and how to position it to the community and the world at large. How are you using your story to engage people around the campaign specifically and your work as a whole?

For example, using that same organization from the example above, perhaps our story is that the community has all the resources teachers and schools need to be successful, if only there was more coordination and access to those resources when they were needed. As such, a campaign that reinforces that story by asking for people to register resources in their business, home, or local community instead of just donate.

I want to use two real campaigns to reinforce these two points. First, is the Kiss Malaria Goodbye Campaign: 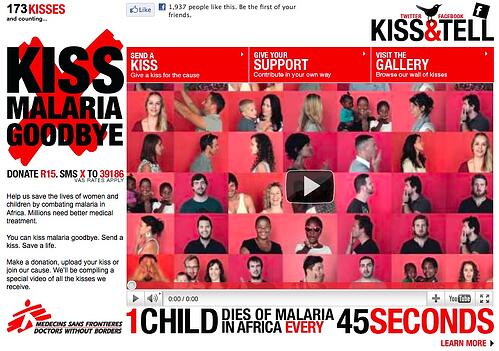 Metrics - It's easy to see what the ask is. But it's hard to see from the perspective of someone coming across the campaign website how responding to that call to action will make a difference. And ultimately, we take action to be part of something as we already have plenty of opportunities to take and share video, photo and messages with our friends or the world at large. The action of sharing a kiss doesn't seem to align with the actions needed to get rid of Malaria.

Story - The action is aligned with the story of "kiss Malaria goodbye" but that is, ultimately, just a slogan. The story here is of how 1 child dies of Malaria in Africa every 45 seconds. Perhaps the campaign could have been anchored in that fact and asked people to make a 45 second or less video to get involved.

The next example, is 350.org and their Days of Action: 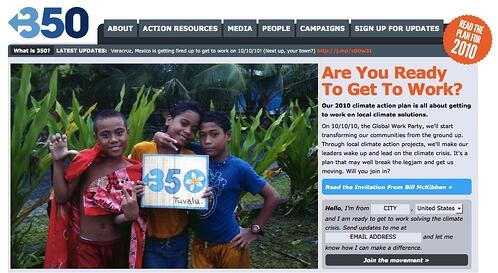 Metrics - The campaigns 350 runs are centered on numbers: both the number 350 (ppm) as well as the sheer scale of participants that can be involved in a collective action. Both are powerful. They reinforce the call for legislative action to bring the levels of carbon dioxide in our atmosphere back down to 350 ppm in everything they do by encouraging participants to use the number in their messages and to take/post images and videos of the actions organized in major cities and tiny villages around the world.

Story - 350.org's story is that our changing climate and toxic levels of carbon dioxide in our atmosphere are affecting everyone on earth. As such, their messages and calls to action are geared at showcasing diversity and participation from all corners of the planet.

Your Opportunity Your supporters take action because they share your vision - or at least a piece of it - and want to join you in making change. Don't let your call to action diminish the potential you and your community have for changing the world!

*Amy Sample Ward is the Director of Membership for NTEN. You can read her personal blog here.

Whether you are part of a nonprofit organization, an action campaign, a local community, or a school, you know that it is ...
Start Reading
Allyson Kapin 2009/7/22 2 min read

I had the great honor of moderating the panel Tools Galore in Online Communications at the Women Who Tech TeleSummit earlier ...
Start Reading