Earlier this year, Adobe released a Social Intelligence report based on consumer data from Adobe Social, Adobe Media Optimizer, and Adobe Analytics. While the data's comprised of both aggregated and anonymous data from retail, media and entertainment, and travel websites during 2013 - 2014, the data is also useful for nonprofits to examine. This report answered a question that has come up for many of us, are our constituents still engaging as frequently with us on social media?

The information from the study includes:

Some key findings that might be useful to your nonprofit: 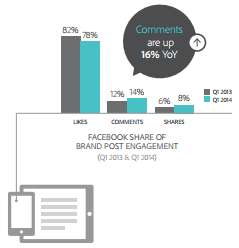 Photos and videos have increased in popularity on Facebook. Engagement with video posts is up 25% year-over-year. Recently, Facebook implemented auto-play videos, and this exponentially increased the amount of videos being watched. Video plays are up 785% year-over-year after auto-play was incorporated.

Posts with images are still receiving the highest levels of engagement. Text posts, on the other hand, have declined in both shares and engagement. Stick a link in that text post, though, and there's been a 77% year-over-year increase in posts with links.

So to circle back around, the answer is yes. People are still very engaged on social networks, and Facebook is still playing a very prominent role in your constituents' lives.

Where are you seeing the most growth online?

First the Book, Then the Movie: Convio and NTEN Share Social Media Insights

There’s a broad spectrum of savvy among nonprofits in social media – organizations of all sizes, some just starting out, some ...
Start Reading
Rachel Hartwick 2016/6/29 7 min read

Despite what your major was in college or what skills you’ve picked up along the way, today’s technology allows you to seem ...
Start Reading
Allyson Kapin 2010/5/20 4 min read