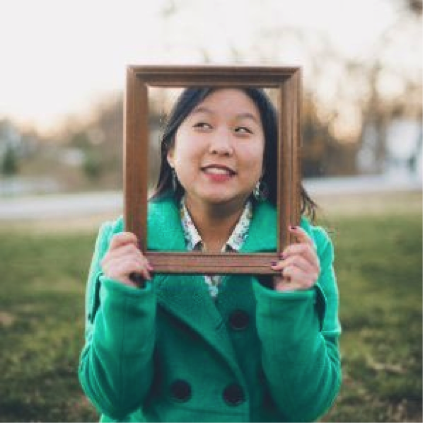 Have you had a chance to check out the stellar infographic, Cracking the Crowdfunding Code, by the Rad Campaign? It concludes with seven traits of a successful nonprofit crowdfunding campaign.

We realize that there’s a lot to unpack, and it might even be intimidating -- your expertise lies in serving people, and all the marketing speak might as well be Greek to you. (Unless, of course, you are fluent in Greek…)

So we’re spelling out those tips for you below to help you raise as much as you can through a crowdfunding campaign of your own!

1. Tell engaging and personal stories to connect people to their fundraiser in an authentic way

Storytelling isn’t just a creative endeavor reserved only for artists, designers, musicians, and writers. Everyone has a story and anything can be used to tell stories -- advertising and marketing professionals do this well to sell products.

Your nonprofit should do likewise -- not necessarily to sell something, but to advocate for your cause. Erica Elmenhurst raised over $11,000 for WorldHelp’s Operation Baby Rescue. On her personal crowdfunding page, she shared her first-hand encounters with young children suffering malnutrition. 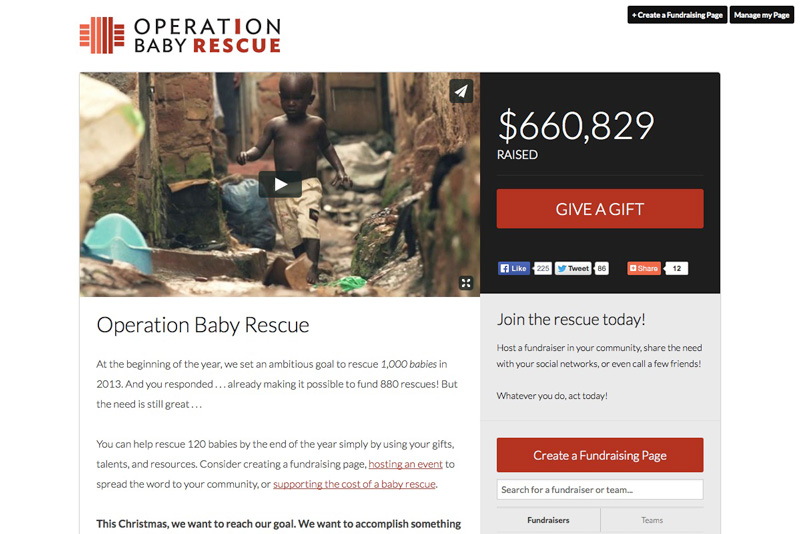 Her compelling experience made her a passionate spokesperson for the cause and inspired her friends and family to join her.

By sharing personal and engaging stories, the campaign becomes a bridge to people; fundraising becomes more than just a means to money, but a way to connect deeply with a mission.

When we say “realistic,” we mean SMART: specific, measurable, attainable, relevant, timely. And what’s “SMART” for one organization might not look the same for another. One man raised over $8,000 in twenty-four hours (with plenty of help) for autism research.

As a novice fundraiser, his initial goal was a reasonable $2,000 -- what we’d call a stretch goal: within the realm of possibility. Raising $2,000 in a day wasn’t out of reach, but it wasn’t going to be a cakewalk either for an individual.

To determine a realistic fundraising goal, nonprofits should look into their donor data to find their donors’ average gift sizes, as well as the number of donors who consistently contribute to fundraising campaigns.

With these key insights, you can create a campaign with a goal tailored to your constituents.

3. Develop a plan to promote the fundraiser and rally their personal networks via multiple channels.

Successful crowdfunding isn’t like Field of Dreams; you have to do more than just build a fundraising site and expect people simply to come. You’ll have to coach your supporters to success.

Here’s how you can do it:

Guide - Show them how to set up their campaign page; without direction, good intentions lead nowhere. Author Daniel Pink illustrates the need for an “off ramp” to drive people to action. In this study, college students were divided into two groups, each comprised evenly of those least likely to contribute to a food drive and those most likely to donate to the drive. Members of one group each received a personalized letter with explicit, detailed directions on how to donate and a follow-up phone call to remind them; the other received only a generic letter about the food drive. Among the students deemed most likely to donate who were given little guidance, only 8% donated. However, among the students thought least likely to give but given specific directions, 25% contributed to the drive.

Empower - Give your supporters-turned-fundraisers pre-made content: for their website; social media channels, namely statuses and tweets; an email they can send their friends & family

Coach - Walk them through the campaign: appraise them of the timeline, troubleshoot whenever necessary, and most importantly, remind them of the importance of their role.

To play a character as well as possible, actors ask themselves, “What’s my motivation?” Your fundraisers and donors will ask the same; clearly show where the money will go. Why the need to convert currency to results?

As a nonprofit trying to garner donations, it’s your job to make these vague positive feelings as concrete as possible, both immediately and on into the future."

Australian startup nonprofit One Girl understood this well and created donation tiers for their campaign, showing how much impact a certain amount would make: a $10 donation provide a girl a schoolbag, a $250 donation cover’s a student’s tuition for a year. Seeing this encouraged a number of donors to give the latter amount.

How can your organization demonstrate this impact with clear financial connections?

One of the best things about a crowdfunding campaign is that all kinds of donors can participate. A donor can just as easily give $25 as they can give $500. Since crowdfunding seeks smaller donations at higher quantities than say, an annual fundraiser, more people may be willing and able to donate.

As such, it’s important that you outline the impact of key gift amounts. Let’s take a look at an example from a top crowdfunding campaign.

Project EPIC, a nonprofit that serves the homeless population, created in-depth giving levels to show how each dollar amount would be used:

For example, $20 purchases one “EPIC pack” for one homeless person.

In this campaign, donors know exactly how their gift will be used to help the homeless people they care about.

The key with setting giving levels is to accommodate a diverse range of gift sizes, so that everyone feels welcome to contribute! Each giving level should be slightly above your donors’ average gift sizes to encourage donors to give a bit more than they normally would.

5. Keep their community updated on their fundraising progress through email and social media

Communication is key in crowdfunding; if you want engagement, you’ll have to engage by keeping everyone in the loop. We’ve observed that there are three kinds of effective communication during a successful campaign:

Updates on the campaign’s progress. Use social media for succinct, daily updates, and emails and blog posts for meatier, weekly updates. Don’t be afraid to share that the campaign is lagging behind -- it might help spur people to action.

Appreciation for participating in campaign. Thank fundraisers and donors en masse with emails and social media posts; this will happen towards and after the end of the campaign. Thank donors who made major contributions and fundraisers who exceeded expectations on a more personal level - an email just for them, a tweet or status highlighting them individually, a handwritten note, a phone call, or even a brief meeting over coffee.

Simply put, to brand something means to mark or to identify it. This means that your fundraisers’ campaign pages should be distinctive in the quality of their design.

Customize the template for the donation page so that it blends in with your organization’s online presence. Specifically, the fundraising page should display:

Branding will reassure donors that their donations are, in fact, going to your organization. You want donors to recognize and trust your online donation forms so that they’re more likely to follow through with a contribution.

7. Stand out by making it fun to grab people’s attention

Your core supporters will probably be the first to dive into crowdfunding – or any chance to promote your mission, really. Volunteer fundraising may be a labor of love, but the best campaigns will make it so effortless and enjoyable that it doesn’t even feel like work.

Whichever strategy you choose, you should pick something that aligns with your constituents’ interests and attitudes.

You may find that the activity associated with the campaign is a bigger draw for some fundraisers and donors than the cause itself. It’s possible to attract donors or fundraisers who were less likely to donate because they’re into the novelty of the activity.

To summarize, a successful crowdfunding campaign hinges on clear and consistent communication with fundraisers and donors about the:

A very successful crowdfunding campaign will not only meet your fundraising goals – it would exceed the goals and expand your supporter and donor base.

Sara Choe is a Customer Advocate for CauseVox. As a social-good jill-of-all-trades, she enjoys sharing stories of people making the world a better place to live.