People donated more money to charity in 2012 than in 2011, according to a Blackbaud survey, where over 4200 donors from the US, the UK, and Australia responded to a variety of questions about their donation habits to nonprofits. They survey results showed that US donors contributed the most to charity overall, 3x as much as UK and Australian donors. Older donors gave the most amount of money in each of the countries.

In addition, the net percentage of donors increasing contributions year over year was highest in Australia at 11.5%, followed by the US at 7.8%, and the UK at 5.2%. The results also illustrate mobile’s growth and how it’s becoming an even more important channel for younger donors. Check out the some of interesting data below. 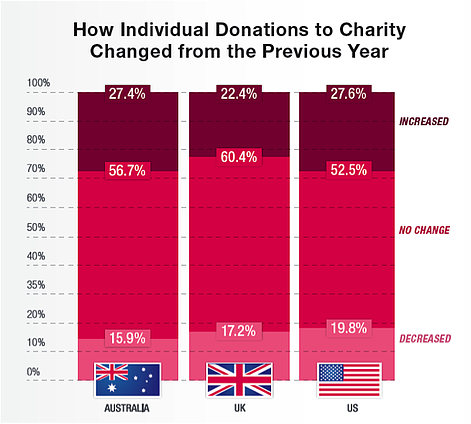 In the past year, about two-thirds of respondents in each country reported making regular donations, which are typically scheduled as recurring direct debit gifts. Of those, approximately 40% made regular donations to one charity and another 30% regularly contributed to two organizations.

What Motivates Donors to Give to Charity?

US respondents were more motivated by a change in their financial situation. 21% said they were motivated by a personal circumstance with either themselves or a loved one having been affected by the cause the organization supported. 16% said they were inspired to sponsor a friend or colleague participating in an event. UK and Australian respondents were more likely to be driven by an innate desire to help.

Respondents who made recurring donations named three factors that impact their decision to donate money to charity.

1. An improvement in their personal financial situation

2. Having passion about an organization’s mission

3. Access to information that proved the impact of their contributions 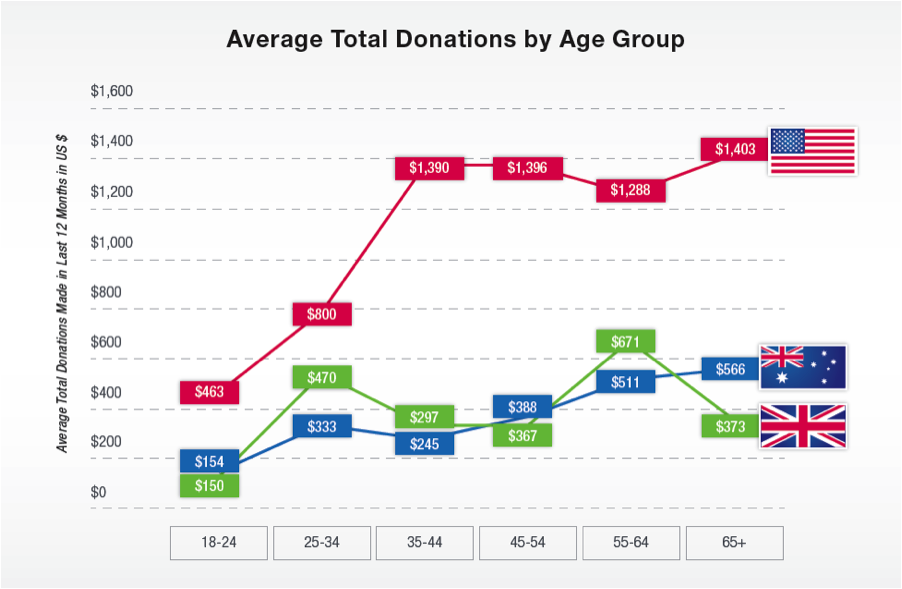 Why People Aren’t Donating to Charity?

Between 20% and 30% of people from each country reported they had stopped making regular donations to an organization in the past three years. More than 40% of donors said that it was due to their personal financial situation. The second most reported reason for stopping regular donations was a feeling that the charity was not making the best use of its financial resources. This is why it’s critical that organizations communicate with donors regularly and share how their donation is making a real impact on the ground.

A Look at Donor Behaviors

According to the study, there were several significant differences between countries and age groups with regard to the channels donors preferred to use make donations.

On average, respondents from the US and UK who prefer to donate via check reported donating more in the last 12 months than those who prefer other methods of donations.

The mobile market has experienced significant growth over the last few years. There are now over 6 billion mobile subscribers worldwide. As nonprofits prepare to redesign their website in 2013 they need to include responsive design in their plans, so that when donors view their website and attempt to make donations, they can do so easily. The survey makes the case for the investment in responsive design. US respondents said that they were more likely to report using their mobile phone to read emails, view websites, and make charitable donations through an organization's website. However, the likelihood of using a mobile device to view websites, read emails, send SMS/text donations, or make charitable contributions through an organization’s website significantly decreased with age in all three countries. 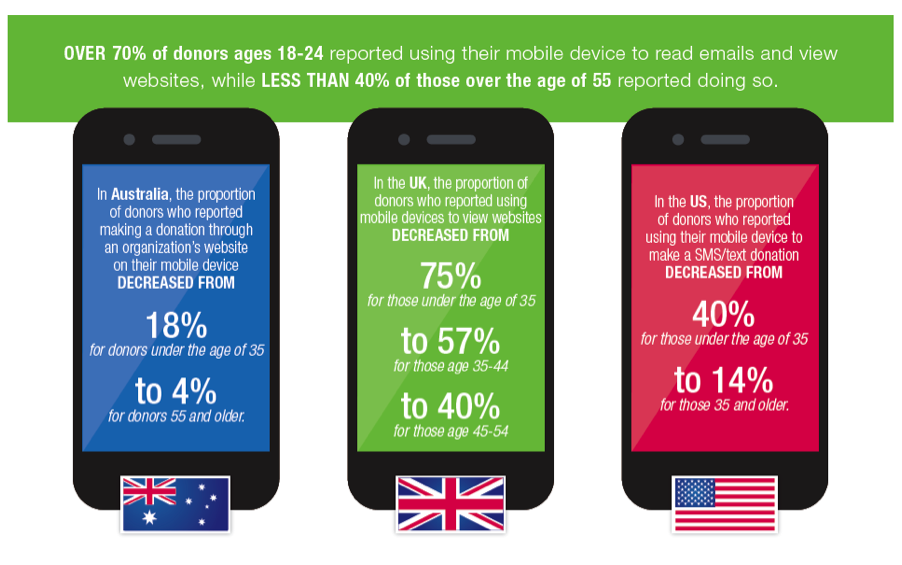