Winning the Story Wars: Why Those Who Tell (and Live) the Best Stories Will Rule the Future 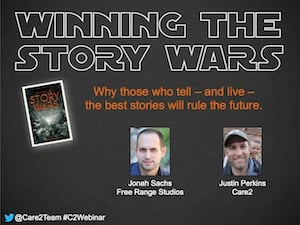 Are you looking for a better way to tell your organization's story?

Tired of watching your cause drown in the flood of marketing messages that surround us?

Ready to get people to listen to what you have to say and - even better - become evangelists for your cause?

Watch Jonah Sachs, CEO of Free Range Studios and author of Winning the Story Wars: Why Those Who Tell (and Live) the Best Stories Will Rule the Future, and Justin Perkins of Care2, share how you must engage in storytelling to get noticed and create a better future.

In this webinar you'll learn:

Master the art of story telling with this webinar!

Jonah is an internationally recognized storyteller, author, designer and entrepreneur. As the co-founder and creative director of Free Range, Jonah has helped hundreds of social brands and causes break through the media din with campaigns built on sound storytelling strategies. His work on legendary viral videos like The Meatrix and The Story of Stuff series has brought key social issues to the attention of more than 60 million viewers and his interactive work has been honored with 'Best Of' awards three times at the standard-setting South By Southwest interactive festival. Jonah’s passion lies in exploring the crossroads of ancient storytelling techniques, social responsibility and emerging technologies. Released in July 2012 by Harvard Business Review Press, his book Story Wars calls on case studies from his own body of work and some of the most successful brands of all time to show how values-driven stories will not only revolutionize marketing, but represent humanity’s greatest hope for the future. Jonah and his work have been featured in The New York Times, The Washington Post, CNN, FOX News, Sundance Film Festival, NPR, The Colbert Report, and in FastCompany Magazine, which named him one of the 50 most influential social innovators. He lives in Oakland with his wife Chelsea, their daughter Mira, and son Orion.

Since 2006, Justin has worked with Care2 on over 250 campaigns to recruit millions of supporters for nonprofits across a wide variety of social and environmental issues. He also launched frogloop.com, a leading nonprofit marketing blog. Justin developed one of the first social network ROI calculators to help nonprofits plan and evaluate their social media efforts. He is passionate about helping nonprofits use a data-driven, efficient approach to online marketing. Justin has an MBA from the University of Colorado and has worked a variety of jobs ranging from organic farming, to starting a human rights nonprofit in Congo, to launching an artisan roasted-nut company in Colorado. He volunteered on the Strategy Committee for the Boulder Farmers Market, the Board of Prevent Human Trafficking, and currently serves on the Advisory Board of Citizen Effect. Justin enjoys climbing peaks, trail running, skiing, and lives in Colorado with his little family.