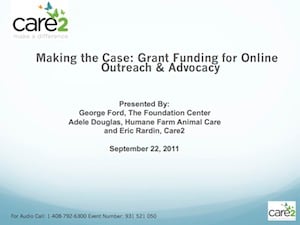 But how do you get started building a program, especially if most of your funding comes from foundation grants?

Find out how some nonprofits are making the case to foundations that funding online outreach is a great investment.

Join Care2 and the Foundation Center for our webinar on getting foundations to fund online outreach and advocacy campaigns, and grow your base of online donors in the process.

This webinar will show you how to use advocacy to help improve your fundraising efforts.

George Ford, Project Manager, The Foundation Center
George Ford has been with the Foundation Center since March 2004. As product manager for online subscription services including Foundation Directory Online, he is responsible for day-to-day oversight and the development of new product enhancements.

Adele initiated the concept of humane certification for farm animal products in the U.S., beginning with her launch of the Free Farmed program for Farm Animal Services. Ms. Douglass now directs all programs and activities of Humane Farm Animal Care, including managing producer relationships and serving as media spokesperson. She serves as an invited participant on numerous industry animal welfare committees including the Food Marketing Institute, National Council of Chain Restaurants, and Burger King, while also serving on the Boards of The Center for Food Safety and the Center for Technology Assessment. Prior to this, Ms. Douglass was director of the American Humane Association’s DC office for 13 years, where she advanced the organization’s legislative agenda to protect both children and animals while developing tools to increase grassroots lobbying. She gained her expertise on legislative matters as a staff member for former U.S. Representative Bill Green (R-NY). Adele is an Ashoka Fellow, and a recipient of Civic Ventures' 2007 Purpose Prize and ASPCA’s Lifetime Achievement Award.

Eric is Vice President of Business Development at Care2.com where he helps hundreds of nonprofits connect with donors and supporters online. At Care2 Eric advises nonprofits on email acquisition and multichannel conversion strategies. He has contributed to integrated conversion efforts on behalf of nonprofits in the US, Canada, and the United Kingdom. Eric serves on the board of directors of two national nonprofit organizations. Prior to joining Care2 Eric designed and executed integrated advocacy campaigns for environmental nonprofits for more than seven years. Eric has an MBA from the Carey School of Business at Johns Hopkins University, an MA in Government and International Studies from the University of South Carolina and a BS in Political Science from the University of Wyoming. In addition to his work in the environmental advocacy arena, Eric has extensive experience working on political and issue campaigns from Wyoming to South Africa.