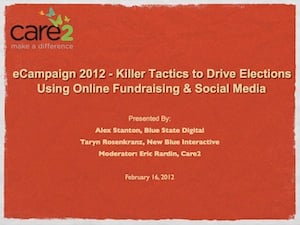 Electoral campaigns are important incubators of new techniques and tactics in online fundraising and organizing.

From Barack Obama's campaign to the thousands of state and local races across the country, campaigners are relentlessly testing new approaches and refining proven tactics in online fundraising and social media to gain an edge over their rivals -- and in some cases to make history.

Watch this webinar to hear from two experts who are working in the heart of Campaign 2012.

Prior to joining BSD, Alex spent three years at GMMB, a political, issue and cause communications agency based in Washington, DC. There he worked to develop award-winning advertising and outreach efforts for a cross-section of clients including Obama for America, Senators Harry Reid, Ron Wyden and Mark Warner, the DSCC and DCCC, as well as the American Medical Association, and the U.S. Climate Action Partnership.

Previously, he served as Campaign Manager for Mayor James Fiorentini's successful re-election effort in Haverhill, MA and spent a year as a fellow at the Center for the Study of the Presidency.

A native of Sudbury, MA, Alex graduated from Middlebury College with a degree in Political Science. He currently resides in Manhattan.

Taryn mostly recently served as the managing director of finance and new media programs at the Democratic Congressional Campaign Committee (DCCC) where she helps to elect more Democrats to the U.S. House by developing cutting-edge new media and fundraising activities. During her tenure, she increased the DCCC’s email list by over 400% and raised over a $110 million dollars for the committee through grassroots outreach (mail, phone and email). She also provides individual strategic new media counsel to DCCC candidates and incumbents. Her work has been recognized with a 2008 Golden Dot award for Online Dream Team and two prestigious Pollie awards.

Taryn has both her BA and MA in political science from American University.

Eric is Vice President of Business Development at Care2.com where he helps hundreds of nonprofits connect with donors and supporters online.  At Care2 Eric advises nonprofits on email acquisition and multichannel conversion strategies. He has contributed to integrated conversion efforts on behalf of nonprofits in the US, Canada, and the United Kingdom. Eric serves on the board of directors of two national nonprofit organizations. Prior to joining Care2 Eric designed and executed integrated advocacy campaigns for environmental nonprofits for more than seven years. Eric has an MBA from the Carey School of Business at Johns Hopkins University, an MA in Government and International Studies from the University of South Carolina and a BS in Political Science from the University of Wyoming.