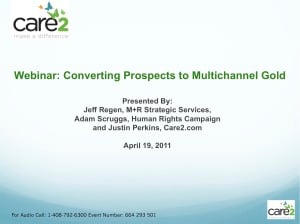 Not sure how much your online supporters are worth?

Thinking there may be a better way to maximize their value? Frustrated at internal barriers to multichannel integration? If so, this webinar is for you. Multichannel donors are gold. Annual revenues are often 4x that of direct mail only donors, with higher retention and much better net.

This session is for those who are ready to break down the barriers and effectively conduct multichannel marketing.

Your prospects can convert to gold! Discover the magic of multichannel with this webinar.

Jeff joined M+R to establish a new practice focused on helping nonprofits with integrated, multichannel fundraising and communications in order to maximize donor/activist value and broader communications goals. Jeff came to M+R from Defenders of Wildlife, where he helped grow the organization’s email list to over 800,000 e-supporters, and generate over 1 million advocacy actions and raise over $5 million online a year. At Defenders, he integrated the online department closely with the membership and communications departments, among others, and spearheaded the nonprofit’s integrated, multichannel approach. Prior to joining Defenders in 2004, Jeff spent 12 years in the private sector. He learned private sector database marketing techniques at Capital One, where he managed marketing and business development teams in both online and direct mail divisions. Jeff also built and served as president of a start-up called EnVisto and worked for the consulting firm McKinsey & Company. In the early 1990s, he worked in the former Soviet Union—first on environmental issues, and later on privatization and capital markets development. Jeff received his Bachelors from Swarthmore College and MBA from the Wharton School of the University of Pennsylvania.

Adam Scruggs is the Associate Director of Data Acquisition and Analysis at the Human Rights Campaign, where he has worked for four years. In this role, Adam is responsible for the collection, management, and strategic analysis of data to support HRC's programmatic and fundraising goals. Prior to this position, Adam worked as part of HRC's sustaining gifts program. Adam holds a BA in Economics from Southern Illinois University and lives in Washington, DC.

Since 2006, Justin has worked with Care2 to help over 100 nonprofits across a wide variety of issues customize strategic campaigns to reach and recruit millions of supporters from Care2's more than 15 million members. He launched Care2’s nonprofit marketing blog, frogloop.com, as a way for Care2 to share case studies and best practices for nonprofit online marketing, advocacy and fundraising, and he developed one of the first social network ROI calculators to help nonprofits plan and evaluate their social media efforts.