The ROI of Social Media

Social media is a hot topic these days. No matter where you look, you just can’t escape the buzz. While we’ve seen explosive growth in use of social networks (NYT reported last week that time spent on social networks has exceeded that of email) many organizations are asking how do you effectively deploy a social media strategy and what is the return on investment (ROI)? The trouble with social media thus far has been that it’s been difficult for practitioners to measure its efficacy.

I had the honor of participating on the ROI (Return on Investment) of Social Media panel at the Women Who Tech TeleSummit with Monique Eldwell of Conversify and Cheryl Contee of Fission Strategies where we laid out some key metrics and useful case studies.

We decided to organize our session, organized by Monique, by doing a little 101 on social media (what it is), ROI (how do you define it, different metrics used to measure it) and the challenges those organizations of all stripes face. We know that lots of orgs have heard some variation of this from their bosses—“We need to get on the Twitter!” But the fundamental question presented in this panel was “Why?” Organizations can fall prey to what Monique called “Shiny Object Syndrome” (and this is true of nonprofits as well as political organizations and even companies), jumping on the bandwagon of the latest social network, technology or tool, without asking whether that serves organizational goals—who are you trying to reach, what are you trying to get them to do, and how do you define success?

Some Basic 101 Resources and Metrics
ROI = What you spent divided by what you got out of your investment.

The metrics for measuring ROI can be extremely varied. Here are a few examples.

And this list is by no means exhaustive. Charlene Li and Forrester Research developed one of the other more popular ROI models for Social Media. While this model focuses more on the ROI for blogs, there are some useful metrics that can be applied to other forms of social media. Of course one of the biggest returns is brand visibility.

You can see the metrics in action in the chart below. 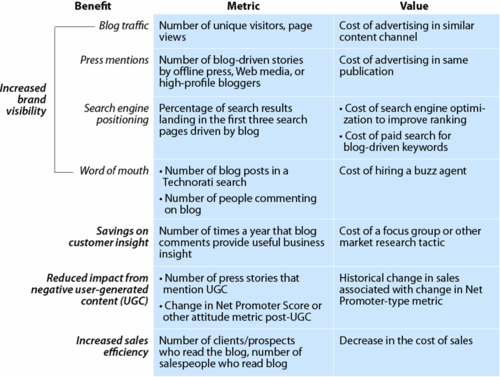 One of my other favorite models is the social networking calculator Justin Perkins developed over here at Care2. The comprehensive calculator tool calculates an estimate of cost and ROI for the recruitment and fundraising efforts of your staff in social networking sites like Facebook or Twitter.

And then it was time for some case studies. I’m going to summarize the basics and provide the link to the Women Who Tech podcast at the end, which is far better at laying out all the critical details in each case study.

Nonprofit: Monique shared a case study for a nonprofit called the Rasmuson Family Foundation, one of the largest foundations in the US, around increasing awareness of their Artists’ Award program. Conversify was successful at increasing applications, particularly from rural residents and minorities, a key goal.

Corporate: Cheryl provided a corporate case study around the General Motors’ Fast Lane blog created years ago. It has evolved as a way to engage customers, and increasingly policymakers and industry insiders, which GM valued at $180,000/year by measuring the number of customer comments.

Political: I closed out by using an example from the 2008 presidential campaign—and no it wasn’t Barack Obama. I chose the insurgent campaign of Ron Paul, both because it was not a $600 million operation with millions in earned media, but rather a small insurgent-like campaign.

Many may have heard about the so-called Ron Paul “Money bombs” which were at first supporter-led efforts to raise millions in a single day on Nov. 5th, 2007. This was without the benefit of huge email lists, paid media efforts, or even the expertise of the campaign (though they did support the efforts once they heard about them). The result for a single day was $4.3 million, a tactic the campaign itself copied a month later with $6 million raised in a single day.

You can check out the podcast for yourself here (and you can also see the slides and skip to the portions of the audio that’s most interesting to you.) And if you have any examples of successful social media campaigns, we’d like to hear about them. Comment below or feel free to email me: heather (at) care2team.com