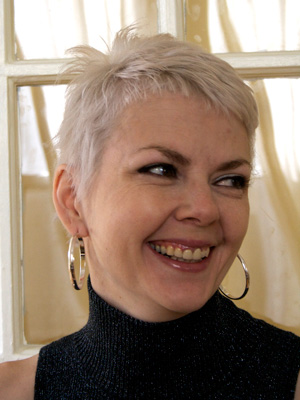 Deanna ZandtAs part of a workshop on social media that I gave with Susan Mernit at the 2009 Women, Action & the Media conference, I pointed out Wellstone Action as an example of an organization that's doing great work on Twitter. After the workshop, I wondered how @wellstoneaction planned their Twitter usage-- were they really some sort of non-profit advocacy Twitter mastermind, as I'd suspected? Elana Wolowitz, the Communications Director and voice behind the @wellstoneaction profile, took some time out of her hectic schedule to answer a few questions.

Deanna Zandt (DZ): How long have you been on Twitter? What inspired you to join?

Elana Wolowitz (EW): I'm pretty sure we started in May or June of 2008. I was starting to hear more and more about the service (from bloggers and early adopters like Beth Kanter and others), and simultaneously was launching a new website for Wellstone Action that we wanted to be more interactive, and which included a blog. I was looking for ways to be accessible to our constituents, grow our audience, and virally promote our content, so Twitter seemed like the way to go. But mostly I just wanted to try something new and experiment -- throw something at the wall to see if it stuck.

DZ: Was there any organizational resistance to Twitter (or other social media)? What convinced them?

EW: I wouldn't say there was organizational resistance at all. More like organizational confusion, mixed with good-natured mockery when I talked about it in staff meetings. In my role as Communications Director, it is in my job description to promote our work and grow our network while building our brand, so I didn't ask permission to start tweeting and I didn't have to prove to my ED or Board the value in terms of results or ROI. I said, "I don't know if this will be valuable, but it can't hurt," and any tactic that could help raise our profile was received well. After the Obama campaign, more of our staff and partners really saw the value in social networking, and then were even more on board.

DZ: Is there more than one person that tweets for your organization? If yes, how do you schedule who does what and when?

EW: Well, I am the only person that tweets from @wellstoneaction, and I also have a personal account (with much less interesting ramblings @e_lana). Elsewhere in the organization, our Training Manager, Jen Haut, tweets from @campwellstone as a way to interact with participants/alumni from our flagship training program. Our Executive Director, Jeff Blodgett (@jeffblodgett), is on Twitter, but I still am working on showing him of some of the benefits beyond just broadcasting links to our content. A few of our staff have personal accounts and mostly just "listen", but have contributed updates from out in the field - this includes Sarah Scanlon (@sarahjscanlon) and Peggy Flanagan (@peggyflanagan). Since we don't share user names, we don't need to schedule our tweets.

DZ: What's your Twitter "plan," so to speak-- what are your guidelines for tweeting?

EW: I wish I could tell you that we had a "plan!" Really, I think that the people who have said that Twitter is hard to access but once you start doing it, you find its usefulness to you have it right on. The only guideline I have is that our tweets should be genuine and come from a real "voice" -- and that for our organizational account, that "voice" is a key part of our brand. We try to keep it light, informal, and funny -- providing helpful resources and interesting links, and being responsive to our followers, while also using it as a way to crowdsource and get buy-in and guidance on new projects. We want to have a mix of self-promotional content and links to things happening in the progressive movement that our audience should know about, but might not necessarily read about from any traditional or even new media sources. If I were to put a ratio on it, I wouldn't want to exceed 30% self-promotional content to about 70% links to other things. Some days are more on one end than others, but overall that is our goal.

DZ: What do you feel you're getting out of it? Also, are there any specific examples of a "Twitter success" that you can share?

EW: I think that the jury is still out on what we are getting out of it. Clearly there is value, but it can be hard to define. We get a direct line to our constituents, who can give us instant feedback and answers that we're looking for. It allows us to find interesting content by following like-minded organizations and partners, and pass that on, sometimes writing blog posts about things we find. It's a good mode of communicating with the media, and we have had a couple of successes in that realm. Jason DeRusha from WCCO news in Minneapolis (@derushaj) tweeted that he was looking for sources on a story about lawn signs. At Wellstone Action, it's a running gag in our trainings that we say "Lawn signs don't vote!", so we had a particularly interesting angle for him on the story and I contacted him and was interviewed for the news that night. It wasn't a story I'd planned on pitching, but it was a great way to promote our brand (irreverent, not politics-as-usual) and help a journalist looking for a source. Also, when Sarah Palin knocked community organizers in her speech at the RNC, we did a rapid response blog post about the real responsibilities of a community organizer. That is our only post that has gone majorly viral, getting picked up by a lot of other blogs and news sources, and Twitter helped with that a great deal.

DZ: How does it fit into your overall communications strategy? Does it ever feel like, "Oh god, I've got to tweet again" or otherwise overwhelming?

EW: It did in the beginning. I would have to get to work and sit there and think, "what the heck am I going to say today?" I knew that I had to contribute to make it work, but unsure what made sense. As I become more familiar with the service, and followed more people, it became easier. Twitter is a component of our overall communications strategy, but not because we have specific metrics and goals in mind. I think the medium is just too fluid for that. Right now, we're using it to grow the audience of people that are involved and help create that amorphous "buzz". Paradoxically, I think that as Twitter grows in popularity and loses some of its potency as a place for early adopters and influencers, its ability to generate buzz is reduced somewhat. But it's still a great tool in the toolbox and I love interacting with our followers. -- It's a beautiful thing to see Twitter being used organically by an organization-- participating in the conversation, growing its audience and constituency through sharing of information, giving followers solid actions to take. And, as a result of that organic approach, they have achieved a solid amount of success with a relatively low level of investment when one looks at the costs of other campaign strategies. Bravo, Elana and the rest of the Wellstone Action crew!

This article was written by Deanna Zandt, a media technologist and consultant to key progressive media organizations.