Testing email subject lines and content is pretty easy with many email marketing tools, but there was never an easy way to do the same thing with webpages...until Google Optimizer.

I first heard about Google Optimizer from an Obama Campaign veteran and have become a big fan. To use it, you create a webpage and variations of that page that you'd like to test (for example, you might want to test if people respond better to a picture of a polar bear or a happy child on your donation page). You then set up an "experiment" on Google Optimizer where you tell it what the test pages are and what the conversion page is (such as the "thank you" page if you're testing your donation process).

The amount of time to get results will depend on the traffic to the page, but Optimizer will soon generate a report about which variation performed better, and you can easily shift your traffic to the winner. Here's a sample report: 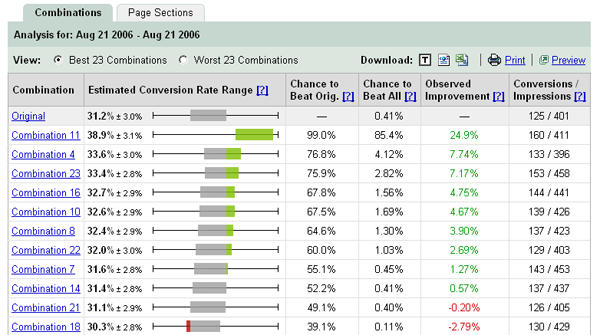 Google Optimizer also allows for "multivariate testing". From Google: "Multivariate tests... allows you to test multiple variables -- in this case, sections of a page -- simultaneously. For example, you could identify the headline, image, and promo text as parts of your page you'd like to improve, and try out three different versions of each one. Website Optimizer would then show users different combinations of those versions (let's say, Headline #2, Image #3, and Promo Text #1) to see what users respond to best. Multivariate tests are more complicated, and typically require higher page traffic."

You can test out page content, design choices and site-wide content. Properly used and paired with your existing website analytic solution (whether Google Analytics or another real-time solution like Woopra), Google Optimizer becomes a useful addition to your bag of tricks. But there are some things to look out for:

To avoid these pitfalls, I'd recommend:

Google Optimizer functionality is especially powerful for important pages like donations or signups. It might take a bit of work to perform and analyze the tests, but you'll rest easier knowing your donation pages are performing really well. Oh, and did I mention that it's free?

You can check out Google Optimizer here.