After Copenhagen: Turning Activism Into Impact

Going to the U.N. climate change conference in Copenhagen (COP15) was the closest I've come to a good strong punch in the gut -- the type that makes you question much of what you once believed to be true. But it was also one of the best wake-up calls I could have asked for.
My time in Copenhagen reminded me that for all the money and good intentions in the world, we can't make a bit of difference if we don't fully appreciate, understand, and react to the political landscape we're playing in as online campaigners and strategists. That means setting aside our shiny online tools and tactics long enough to ensure that we're using them to deliver real impact. 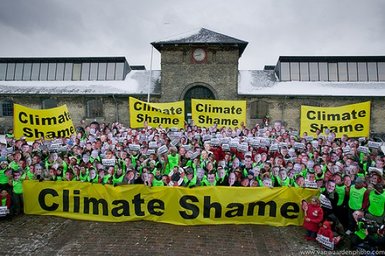 By most accounts, "civil society" and NGOs were effectively shut out of the U.N. dialogue and process -- even as observers. These are the wonks and influencers we rely upon to represent the interests of a global citizens movement, and the people who dedicate entire careers to providing comprehensive research and intelligence to policymakers and bureaucrats. The result of this blackout? With the important exception of personal relationships that some NGO leaders and insiders had with negotiators or delegates, there seemed to be few if any clear opportunities around which campaigners could mobilize their people.

The scene outside the conference center was an eye-opening example of noble intentions stifled by a complex political landscape. A poignant case in point: two young women whose activism took the form of a hunger strike -- they hadn't eaten in more than forty days. They sought to reach decision makers through non-violent protest and presumably media attention that would embarrass or influence leaders. But to what end? While some negotiators may have heard about this Climate Justice Fast thanks to several organizations who joined in, I'd venture that not one political actor with real power had any idea about these two women and their fast.

Witnessing these hungry women muster the energy to speak each syllable filled me with an overwhelming sense of despair and frustration. With all of the technology and social networks and organizing talent I know we have in the world, this was the best we could do?

I'm not just talking about individual activists like the hunger strikers. The majority of international and national NGOs that I saw asked members to do little more than sign online petitions or follow dispatches / updates from Copenhagen. 1Sky and 350.org upped the ante by asking members to pick up the phone and light up the switchboards of world leaders, and the Energy Action Coalition invited its young members to stage sit-ins at local Senate offices.

Unfortunately, there's little if any evidence that President Obama ever saw or heard the phone calls or the thousands of Americans on the internet asking him to stand strong on emissions targets or financing options.  Or, likewise, that any negotiator was moved by a list of 15 Million global citizens -- of 6 Billion -- ready for a "fair, ambitious, and binding" climate deal.  (The 15 Million names were delivered to Yvo de Boer, who leads the U.N. process -- not to the countries or negotiators holding up progress.)

We need to refocus.  It's incumbent upon all of us to avoid getting so caught up in the art and craft of our online engagement and online campaigning work that we're blinded to the reality of the people we're trying to influence -- or the landscape in which we're operating.

Let me be clear. Organizations, NGOs, and the climate movement played valuable roles in the climate talks.
The TckTckTck global alliance facilitated critical and unprecedented message coordination, collaboration, and information sharing through its open campaign structure. And I highly recommend Phil Aroneanu's post on the impact the [growing] global climate movement had on altering the narrative in Copenhagen "even though we ended up with a 0 from our leaders."

But from a public engagement and campaigning perspective, what could we have done differently to leverage the force of a broad citizens movement in a way that could effectively influence a small number of policy makers?

Let's stop declaring victory in our online campaigns while we lose the very battles that many of these campaigns and their sponsoring organizations are setup to fight. My colleague Allyson Kapin compiled a wonderful list of some of the most innovative online campaigns of 2009 here at Frogloop (and we catalogued a few of our own here) -- but at what point will we stop calling campaigns successful if they wowed us with cool tech or participation numbers but failed to move the needle? What role are these campaigns playing in bringing the change we seek?

Increasingly the metrics we use to gauge success online will need to incorporate or connect to overall impact. Total eyeballs or unique visits to a campaign site will only matter insomuch as that's an audience of eyeballs that a decision-maker is truly concerned about pleasing.

I've started an initial list of what's needed to be an effective campaigner these days -- what's missing?

The question for us all, though spurred on by Copenhagen, stands independent: How can we ensure that our actions and our campaigns are influencing the right actors at the right time? I fear that the rapid-fire pace of our new media world is increasingly short-circuiting essential strategic targeting and planning work -- thereby pressuring campaigners, bloggers, and even internet directors to confuse quality for quantity, activity for results. It's clear that we need to spend more time ensuring that our shiny online tools line up with strong political strategy.

* Michael Silberman is a partner and co-founder at EchoDitto, an internet strategy and online campaigns team that works with leading social change organizations.