A Look At Canadian Philanthropy Across Generations

Last week Blackbaud along with partners HJC, Sea Change Strategies, and Edge Research released findings from the 2013 Next Generation of Canadian Giving study.

The study looked at the following:

1. The majority of Canadians donate money to charity. Civics are the most generous generation. About 9 in 10 of Civics give, and they support a variety of causes than younger generations. However, it’s worth noting the this generation is dwindling and their income  is holding steady. 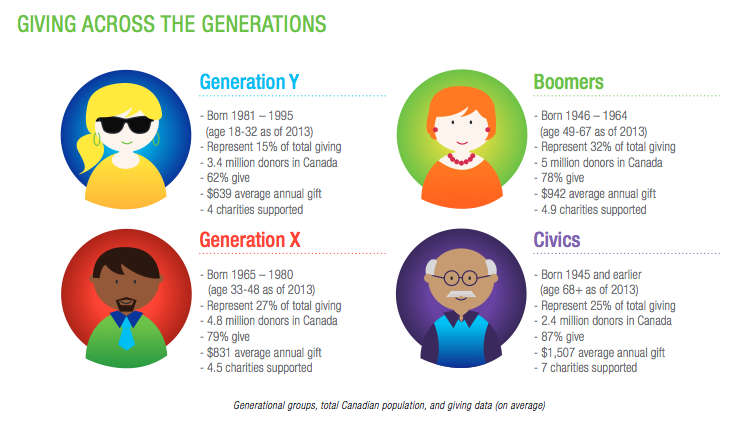 2. Baby Boomers will have great influence on charitable giving for the foreseeable future, but Generation X is quickly catching up. This is the generation to watch and cultivate now.

3. Most donors across all age groups do not plan to expand their giving in the coming year. This is not surprising given that many people across generations are still feeling the impact of a struggling economy.

4. While multichannel communications has become standard these days, your organizations needs to find the right mix when you target different generations. For example, direct mail is not dead. Generations Y and X prefer to give online, and as many Baby Boomers say they give online as via direct mail.

5. Generation Y donors have distinct priorities and preferences with regard to causes they support.  They demand accountability and transparency than older donors.

6. Among transaction channels, the future of telemarketing and giving by SMS/text does not look so great in Canada, but face-to-face and street funding is surprisingly strong.

7. Peer-to-peer fundraising and crowdfunding appear to have promising futures as fundraising strategies for younger generations. Though you should note that this takes a lot of staff resources, planning, and time to raise significant money.

8. Nearly half of those who give engage with causes in ways other than making donations. Embrace it! 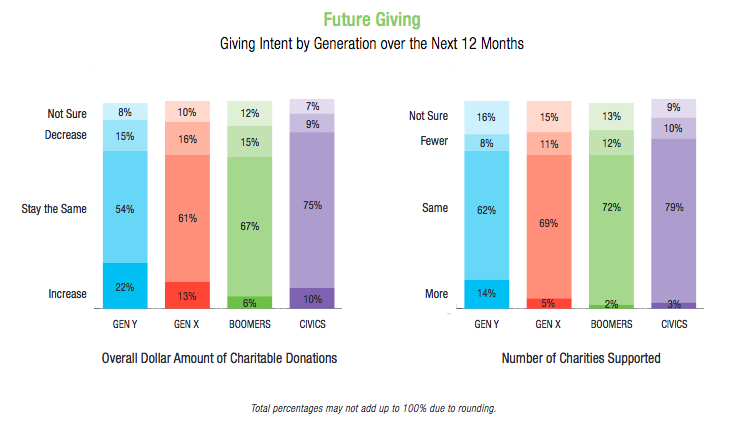 Now that you have seen the statistics around Canadian giving, how will you use this data? The report suggested that you think about the following questions:

1. Have you underinvested in fundraising to Gen X donors, who are a quickly rising force in philanthropic giving in Canada?

2. Have you completely ignored the up and coming younger generations, or relegated them to an un-strategic social media effort?

3. Does your fundraising channel mix include direct mail for younger donors and digital communications for older ones?